Another round of UEFA Nations League matches are behind us and that can mean only one thing; the EPL is finally back this weekend!

England put in a fantastic shift to beat Spain on Monday night. Many players who featured in that match will be hoping to recreate those performances for their respective clubs over the weekend. Starting with an epic lunchtime clash between Chelsea and Manchester United, the action goes through until Monday night, where Arsenal host Leicester.

After another international break EPL fans are treated to what could be a fiery start to the weekend’s action. High-flying Chelsea meet struggling Manchester United in one of the league’s biggest rivalries.

Antonio Rüdiger missed Germany’s ill-fated international break and is a big doubt for this one. That’s a spanner in the works for Sarri, who is not prone to rotation. Gary Cahill will likely be brought in to fill that gap alongside David Luiz. The good news for Sarri is that Pedro is back fully fit. He will add competition to a midfield brimming with talent. Critics continue to praise Eden Hazard as the biggest talent within that midfield and rightly so. The Belgian has been brilliant with seven goals in his last six matches. Rumours persist that this will be his last season in England and while there seems to be substance to that rumour, currently, we should just sit back and enjoy the wizardry that Hazard is conjuring each week.

Mourinho avoided further criticism – and perhaps losing his job – after coming from two goals down to beat Newcastle last weekend. It was an inspired comeback. Old Trafford was the loudest it had been for years, while the players showed that they do still have fight left in them for their manager.

But can the Red Devils do it away to an, in all fairness to Newcastle, much better team? The Blue’s defence is resolute, while Hazard’s free-role means they are one of the most dangerous attacking teams in the league. Both Matic and McTominay are doubts for the match, meaning Mourinho’s midfield may be relatively lightweight. But there are positives. Romelu Lukaku continued his impressive international scoring record while Marcus Rashford was also phenomenal for England against Spain. Paul Pogba too has raised his game and he will have to once again take it to another level to influence this match. Mourinho’s resolute defence has been lacking this season and shows few signs of improving. Luke Shaw pulled out of the England squad due to injury and is also a doubt for this one.

Prediction: Chelsea win – We don’t see a fairytale win for Mourinho against his old club. Chelsea are more organised and possess a much more capable and mobile midfield which – along with Hazard’s individual brilliance – will prove the difference here.

Bournemouth’s fantastic season continues and they currently occupy sixth place in the league. A visit from struggling Southampton to Dean Court will likely have Eddie Howe licking his lips, although Ryan Fraser is a doubt for the match.

It’s three losses on the bounce for Mark Hughes and his Southampton side. Bournemouth are yet to lose at home, meaning Southampton will have to do something extraordinary to snatch a surprise win.

Prediction: Bournemouth Win – Bournemouth are unbeaten at home and have dropped points just once in four games.

Is this Cardiff’s best chance of a win? Fellow newcomers Fulham have just one win to their name, which is all that separates these two teams. Fulham certainly possess more individual talent, so organisation will be the key to a Cardiff victory here.

Fulham are also struggling, but they are scoring more goals than Cardiff. They will fancy their chances of nicking a win here and with Cardiff on the ropes, we think they might just do so.

Prediction: Fulham Draw no bet – Fulham took a hammering against Arsenal two weeks back but they will have learnt their lesson. We don’t see the Cottagers losing this one.

City occupy top spot in the league thanks to goal difference. In even better news, the return of Kevin De Buryne to starting lineup seems imminent. The Belgian will undoubtedly improve the already dangerous team, so any visitors to the Etihad should be worried.

Burnley have turned things round but they don’t have a great record against City in recent years. A disappointing draw against Huddersfield is not the best preparation for this match and Burnley should try to stay in the game as much as possible.

Prediction: Manchester City First Half / Second Half – Expect City to hit the ground running against a team they seem to enjoy playing against.

Losing after being two goals up against Manchester United two weeks back will certainly sting. It looked like Benitez had turned things around but now it seems like one step forward and two steps back. Newcastle simply cannot afford to lose many more games.

Brighton won a rather dull affair against West Ham two weeks back with a Glenn Murray goal the difference. It’s never easy going to St James’ Park but with Newcastle going through a very tough spell, perhaps the Seagulls will fancy nicking another slim victory.

Prediction: Under 2.5 goals – Newcastle have to tighten up while Brighton will try to nick a slim win.

The Hammers will be very disappointed with the manner of the last defeat which brought to an end their good run. In better news, Chicharito is back from injury and will provide some cover for Arnautovic who needs support.

Spurs have put together three wins on the bounce despite not playing particularly well. This will be a another tough match, especially after much of the team featured at least once during the international break.

Prediction: Both teams to score – This is a London derby that often features goals and we see this encounter being no different.

Wolves’ fantastic run led to manager Nuno Espirito Santo being named manager of the month for September. Wolves really have settled in instantly to the Premier League and are now unbeaten in the last six, winning four of them. Many will expect them to continue that record here.

Watford’s perfect start to the season seems a long time ago now as they have picked up just one point from the last twelve. Getting back to winning ways is vital, but this is a very tough match.

Prediction: Wolves Win – Wolves have proved great value so far this season, but the bookies have now wised up and dropped the odds. That said, we think Wolves will win once again here.

Huddersfield deserved at least a point against Burnley two weeks back in a game many thought they would easily lose. Despite home advantage here the task is surely going to be much tougher.

Two draws in a row seems poor for Liverpool but they have faced Chelsea and Manchester City in those games. Avoiding defeat was the first step and Klopp employed a more cautious approach, but the shackles will surely be released here, as we see more of the attacking, pressing Liverpool.

Prediction: Liverpool Win + Over 1.5 team goals – Liverpool aren’t always the best on the road but we still expect them to put a few past struggling Huddersfield.

Everton have put together back to back wins and Gylfi Sigurdsson is perhaps the reason for that. The Icelandic international seems not to have fulfilled his promise for Everton, but the performances – and the goals – are now arriving.

Palace continue to struggle to put together a consistent run and were unable to score at home in their last match. A difficult run of fixtures starts here, so the points may dry up even more.

Prediction: Everton Win – The Toffees are strong at home and Palace will struggle to cope with their attacking talents.

Arsenal are the form team in Europe but new boss Unai Emery is refusing to get carried away. It’s fair to say the fixtures have been kind, but Arsenal are scoring goals for fun. Leicester’s defence is hardly the most secure in the league, so expect that to continue here.

Leicester are yet to draw a match this season, suggesting it’s all or nothing for the Foxes. The Emirates is a fortress once again, so Claude Puel will surely be pondering how to bring Arsenal’s winning run to an end. One thing’s for sure; it won’t be easy.

Prediction: Over 2.5 goals – Arsenal are banging them in for fun, but are far from secure at the back. This could be a great game full of goals.

Place a bet on this 5-fold accumulator at Unibet

Unibet are our bookie of the week. To find out all you need to know about Unibet you can read our Unibet review. 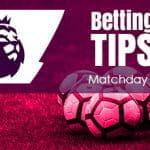