After a round of Carabao Cup games during the week, the EPL is straight back this weekend with a full round of fixtures.

The fixtures are already piling up for the big teams, who played European football last week and will do again next. Will that cause a few upsets this weekend? That remains to be seen, but there are some interesting fixtures that could see some surprise results.

There’s one match where two giants meet head on. It’s not quite a meeting of two perfect teams after Chelsea drew with West Ham last week, but Liverpool maintained their perfect start with a win against Southampton, making it six from six. It’s the first big test for both of these teams, who currently occupy first and third place in the league.

Chelsea made the short trip to West Ham last weekend where the Blues couldn’t do enough to win the match. Despite dominating possession, Chelsea had little in the way of real chances, and rode their luck a little throughout. These two teams also met on Wednesday night in the Caraboa Cup for a dress rehearsal. However, there was barely a first-team player in either starting lineup, so although Chelsea won, that really tells us very little about what to expect here.

Chelsea will be looking to up the levels after last week’s performance at West Ham was somewhat sluggish. Anything like that here, against the high-pressing game Liverpool play, could prove disastrous. Eden Hazard, electric up until that point, wasn’t at his best, which perhaps resonated throughout the team. Nevertheless, Chelsea remain unbeaten and kept a clean sheet. That task will be notably more difficult here. Liverpool have scored in every match and their style will undoubtedly affect how Chelsea play. Marcos Alonso may be forced to defend more than he would perhaps like, while Sarri will require his wide forward players, Pedro and Willian, to also do their bit in defence. Sarri, like his counterpart Klopp, has an attacking mentality, and will want to see his team take the game to the visitors. That could lead to an enthralling game of football.

Liverpool are now the only team to have won all their matches so far this season. A routine win against Southampton was assured by half-time last week as the Reds cruised to victory, while most first-team players for rested in the loss to Chelsea on Wednesday in the Carabao Cup.

Lethal in attack and stable at the back, Klopp seems to have built a force to be reckoned with. The only negative for Liverpool is that Virgil van Dijk went off against Southampton. He took a knock to a bruised rib, which, while nothing serious, does leave him a slight doubt for this match. The Dutch defender has been a rock since signing for Liverpool and he would be a massive loss should he miss out here. Elsewhere, all is well. Despite travelling to Napoli for a Champions League fixture after this match, Klopp will surely play a full-strength team. That means a forward three of Mane, Salah and Firmino for the Chelsea defence to contend with. This is the biggest test Liverpool have faced domestically this season, but it is followed by an even bigger one. After this match, Liverpool face Napoli in the Champions League, before hosting Manchester City next weekend. The results over this next week will surely have a big impact on their entire season.

Prediction: Draw – This is tough to call without seeing the team-sheets, as the absence of van Dijk could throw the initiative to Chelsea. This is such a big match and we see there being nothing to separate the teams, so will be taking an – admittedly risky – punt on a draw.

There’s a cracking midday game this weekend with West Ham hosting Manchester United, while Saturday ends with our match of the day. There’s just one game on Sunday, with the action going through until Monday night, where Bournemouth host Crystal Palace.

Despite Arnautovic not featuring, West Ham were impressive last weekend and held Chelsea to a draw, destroying the Blue’s perfect record in the process. This match will be just as difficult, but West Ham are improving with every game, so don’t put it past them earning something from this match.

United were held by the ever impressive Wolves last week, failing to make it three wins in a row. A tricky Champions League fixture against Valencia awaits on Tuesday, which Mourinho will surely have one eye on. That means there could be some changes in personnel here.

Prediction: West Ham or Draw Double chance – The Hammers are improving with every game and can make it three games undefeated here. At Manchester United, things seem to spiraling even further out of control.

Arsenal have turned things around with four wins on the bounce. The Gunners capitalised on a kind run of fixtures, but things will get a bit trickier now. Nevertheless, confidence has been restored at the Emirates, and the much criticised defence finally got their first clean sheet of the season last week.

The results have slowed down a little for Watford, but they are still playing good football. Unable to hold onto a slender lead last week against Fulham, a draw was perhaps a fair result. This is a tricky fixture, but the Hornets should play their own attacking game, knowing that Arsenal’s defence is prone to collapsing under pressure.

Prediction: Arsenal Win + Over 2.5 goals – Watford’s run seems to have come to an end, but they are still attacking and should score here. Arsenal, on the other hand, are improving with each game.

Everton continue to struggle this season. They were perhaps the better side in the first-half against Arsenal last Sunday, but were then off the pace in the second. Defensive problems persist, which doesn’t bode well for their chances here, as Fulham offer a real attacking threat.

Fulham are without a win in three, but they have faced Manchester City, and battled hard to earn draws in the other two difficult games. With Everton themselves without a win in four, Fulham may well smell blood here.

Prediction: Both teams to score – Everton need to improve and should pick up their performance here at home, but Fulham and Mitrovic offer a real attacking threat.

Huddersfield sit bottom of the Premier League and are still without a win. The Terriers have home advantage here, but the visitors are a tough nut to crack. Huddersfield are tipped by many for relegation this season and unless they start picking up some wins soon, the odds for that happening will be slashed.

Tottenham got back to winning ways after three defeats in a row in all competitions. But it wasn’t easy and after a late surge from Brighton, Spurs were begging for the final whistle. A win is a win and hopefully that will kick things back into gear at Tottenham, who have three favourable fixtures in a row.

Prediction: Spurs Win + Over 1.5 team goals – Confidence is restored at Spurs who face a Huddersfield team that has conceded fourteen goals in six matches.

After a surprise defeat in the Champions League, it was important City got back to winning ways domestically. They did so with style, putting five past Cardiff. With home advantage, they might do something similar here.

Brighton have won just once so far this season and they face the league’s best team here. There is light at the end of the tunnel though, as the fixtures turn for the better after this, but they must be near their best just to avoid a hammering here.

Prediction: Over 3.5 goals – Brighton have conceded two or more goals in all but one game so far, while City have scored ten in their last three matches.

Newcastle held on to pick up just their second point of the season away at Crystal Palace last week. Goals seems to be the problem for the Magpies, with just four to their name so far. Surprisingly, they are yet to pick up a point at St James’ Park yet.

Leicester have had a mixed start to the league with three wins and three defeats. Two of those defeats have come to Manchester United and Liverpool, so the Foxes, while defensively not at their best, are beating the teams around them. With Newcastle really struggling, the Foxes could earn an away win here.

Prediction: Leicester win – While Leicester aren’t in the best form, they are scoring goals, and with Jamie Vardy back they should manage a win against a team with just two draws to their name.

Wolves continue to be very difficult to beat. Manchester United were the latest team to find that out last week, where they were held at home. Wolves are back at Molineux here, where they are unbeaten so far this season, and will be strong favourites heading into this one.

Southampton were extremely disappointing last weekend, offering no real challenge or desire against Liverpool. Danny Ings will return to the squad and the Saints should offer more attacking threat, but they need to improve drastically.

Prediction: Wolves win – Wolves are unbeaten at home and have immediately settled to life in the Premier League, while the Saints have lost two of their three games on the road.

Cardifff are finding the EPL every bit as difficult as expected. They have had a tough run, facing Arsenal, Chelsea, and Manchester City in the last three, but the manner of defeat and the number of goals conceded is concerning.

Burnley finally earned their first win of the season and they did it in style last week. The four goals scored in that game were more than their total to that point, so hopefully confidence has been restored. A match against newboys Cardiff is the perfect follow up for Sean Dyche to try make it back-to-back wins.

Prediction: Under 2.5 goals – Burnley picked themselves up in the league last weekend, but then lost in the cup in midweek. With that in mind, we think Cardiff might try to get something out of this one. Either way, they will want to keep it tighter than recent games.

Bournemouth got a swift taste of reality last week when, despite playing against an out of form Burnley team, the Cherries were well beaten by four goals. The scoreline did perhaps flatter Burnley after Bournemouth started well, but it’s now a case of how well they can bounce back.

Crystal Palace couldn’t find the goal to make their dominance count last week against Newcastle. Nevertheless, they are now two games unbeaten after a bad run of three defeats in a row, and against another team battling for a top ten finish, Hodgson may see a draw as a good result here.

Prediction: Bournemouth Win – Bournemouth are unbeaten at home and will look to bounce straight back from that surprise defeat last weekend.

Place a bet on this at NetBet

NetBet are our bookie of the week. To find out all you need to know about NetBet you can read our NetBet review. 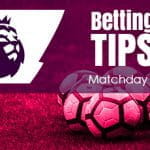