Another week down, another team’s perfect record comes to an end. Watford’s defeat to Manchester United means that there are just two teams left with a perfect five wins from five: Liverpool and Chelsea.

Liverpool have a favourable home tie against Southampton, while Chelsea make a short trip to East London to face a potentially tricky encounter with West Ham. There’s loads more action and as usual we’re on hand to preview all of the weekend’s games.

We’re starting with our match of the day, a London derby between East and West. Chelsea travel east to face West Ham, who finally got their first win of the season last Sunday against Everton.

West Ham were deserving winners against Everton last weekend and the pressure on new boss Manuel Pellegrini has been momentarily lifted. Celebrations were of course in order, but there is concern that main man Marko Arnautovic will not be fit in time for this one, after coming off early with a knee injury.

The substitution was largely precautionary, and while the Hammer’s squad is now deep enough to provide cover, Arnautovic is undoubtedly West Ham’s most effective player. But others are coming through the ranks. Summer signing Andriy Yarmolenko has been eased into life in the Premier League gently. He made his first start last week and rewarded his manager with two goals in a great performance. Felipe Anderson too is looking like the real deal, and will surely soon get his name on the score-sheet. West Ham will have had more time to prepare for this one after Chelsea played in the Europa League on Thursday, but a lot may come down to whether Arnautovic is fit.

Chelsea are one of just two teams with a perfect record still intact. In five league games under new manager Sarri, Chelsea have won all five, while scoring fourteen goals and conceding just four in the process.

Sarri said pre-season that it would take time for his methods to be fully learned by the players, but it appears to be happening very quickly. With two clean sheets, the defence is managing well, but there is without doubt one man who has shone above all others so far. That man, unsurprisingly, is Eden Hazard. He has been in fantastic form, with five goals and two assists already. He, along with fellow first-team starters David Luiz and Mateo Kovacic, did not travel with the squad to Greece for Thursday’s Europa League clash. That means that he should be fresh, which should have West Ham’s defence – the second leakiest in the league – shaking in their boots.

Prediction: Chelsea win + Over 2.5 goals – When West Ham lose, they usually lose big. With Hazard not featuring on Thursday, he will cause the Hammers defence all sorts of problems, while West Ham are not without a significant attacking threat themselves.

Fulham and Watford start us off on Saturday lunchtime with what could be a cracking game. Brighton host struggling Spurs in Saturday’s late game, while the action is rounded off on Sunday with Arsenal against Everton.

Fulham were taught a lesson by Manchester City last week, who all but ended the game after one minute following a defensive lapse by the Cottagers. It was a harsh lesson, but one that must be learnt in the Premier League. Watford are high flying but have now tasted defeat, while Fulham need to put last week’s defeat behind them.

Watford’s winning run finally came to an end, but they were unlucky to lose to Manchester United. The nature of defeat – a spirited, attacking performance – is one that could still inspire confidence. Fulham will test the Hornets defensively, but if Watford continue to play like they have, then they will continue to pick up wins.

Prediction: Both teams to score – Two attacking teams, who both need a win but for different reasons, meet in the early kick-off. Four of Watford’s and three of Fulham’s five games have seen goals from both teams.

Burnley’s miserable run continues. The Clarets are now bottom of the table, with the second worst goal difference. This was not the start anyone expected and Burnley will need to dig deep to get out of this hole. A visit from a top five team who have started strongly is perhaps not what Sean Dyche would have wanted here.

Bournemouth’s fantastic start to the season continued last week with a demolition of Leicester. The Cherries’ attackers are all firing, particularly Ryan Fraser, who can’t stop scoring lately.

Prediction: Bournemouth Draw no bet – Burnley are on the ropes while Bournemouth are on fire. The Cherries are nicely priced and have a great shot at an away win.

Neil Warnock didn’t try to hide his frustrations with defeat last week, where mistakes cost Cardiff, who took a surprise lead against Chelsea. Those mistakes need to be eliminated quickly, but you have to think that even if Cardiff are at their best here, they’re still unlikely to emerge with anything against the Champions.

Guardiola too bemoaned mistakes from his team, despite them winning easily against Fulham last weekend. He was in the stadium due to a touchline ban on Wednesday night when City fell to a shock defeat at home to Lyon. Despite that surprise loss, we expect City to bounce right back, especially since Cardiff are not quite the opponents that Lyon are.

Prediction: Manchester City win + Both teams to score no – City will surely return to winning ways, while the limited goal-threat that Cardiff offer will mean they aren’t really troubled at the back.

Wilfried Zaha returned to the team and Palace returned to winning ways last week against Huddersfield. The Eagles have a great chance to make it back-to-back wins here against struggling Newcastle.

Rafa Benitez is cutting an increasingly frustrated figure on the sideline at St James’ Park, as his concerns at the effects of the lack of summer signings are being realised. Newcastle must become more ruthless upfront and solid at the back, sooner rather than later.

Prediction: Crystal Palace win – Zaha is back scoring goals and Tomkins has returned to strengthen the defence. After a couple of disappointing defeats, Palace should go on another good run.

Leicester were made to pay for sloppy defending last week, conceding four goals to Bournemouth. They’re unlikely to come under the same pressure from Huddersfield, but nevertheless, the Foxes need to improve at the back. Huddersfield are struggling and this should be an opportunity for Leicester to take the attacking initiative.

Huddersfield are in their second season in the Premier League and need to shake the small team mentality. They’ve scored just two goals in five games, meaning defensive resilience is irrelevant unless they start scoring regularly. Leicester’s defence is porous at the moment, so instead of concentrating on not conceding, David Wagner should set his team up to attack.

Prediction: Leicester win – While Leicester aren’t in the best form, they are scoring goals, and with Jamie Vardy back they should manage a win against a team with just two draws to their name.

Liverpool are looking the team to beat. An impressive win against Tottenham was followed by a win against PSG in the Champions League on Tuesday. Anfield is a fortress right now and even though Klopp is likely to rest a few key players here, Liverpool will surely still stroll to victory, such is the strength of their squad and confidence levels.

Southampton let a two goal lead slip to draw at home to Brighton last week. That’s not the kind of preparation you want before making a trip to Anfield. Top scorer Danny Ings is ineligible to play against his parent club, weakening the Saint’s attack significantly.

Prediction: Liverpool Half Time/Full Time result – The Reds are irresistible at Anfield and should extend their perfect start to the season here.

United cruised to victory in the Champions League on Wednesday, where Paul Pogba was phenomenal. The Red Devils also fought hard to beat previously unbeaten Watford last weekend. Things are improving quickly at Old Trafford, but with minimal rest after Wednesday night’s game and with tricky opponents in the form of Wolves, victory here is far from a given.

Wolves were deserving winners against Burnley last week. Things will be more difficult here, but as we saw when Wolves visited Manchester a couple of weeks back, the team rise to challenges. After drawing with Manchester City, you wouldn’t put it past Wolves walking out with Manchester with something to show for their efforts once again.

Prediction: Under 2.5 goals – Wolves are proving worthy opponents and improving with each game. We think they’ll try to capitalise on some potential fatigue among the United ranks, but at the very least will keep things tight.

Brighton can be pleased about coming back from two goals down to salvage a draw last week. However, the Seagulls are yet to keep a clean sheet and must improve defensively. While Spurs are a bit out of sorts, they are still an attacking force to be reckoned with, so this will prove a good test of Brighton’s determination.

Spur’s miserable run continues. Back-to-back defeats in the league were followed by defeat in the Champions League on Tuesday, despite leading that game for 80 minutes. Tottenham’s mental resolve has long been questioned, but if they really want to challenge for titles, they must stop throwing away games. Lose again here, and they will be a long way off the pace after just six weeks of the season.

Prediction: Over 2.5 goals – There’s just one clean sheet between these teams so far, while all of Tottenham’s and three of Brighton’s five games have featured over 2.5 goals.

It’s now three wins in three games for Arsenal after two initial defeats. The Gunners are taking advantage of kind fixtures, but they are still without a clean sheet. That is Unai Emery’s biggest job to sort out, but Arsenal are at least firing at the other end.

Everton allowed West Ham to get a deserved first win of the season last Sunday. They have an even tougher fixture here, but can welcome back Richarlison from suspension. That will make them more potent in attack, but like Arsenal, Everton too need to improve drastically defensively.

Prediction: Arsenal Win and Both teams to score yes – The Gunners are sure to get plenty of shots at goal against Everton’s leaky defence, but Arsenal have serious defensive issues of their own.

Place a bet on this at BetVictor

BetVictor are our bookie of the week. To find out all you need to know about BetVictor you can read our BetVictor review. 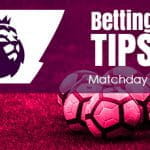