After a short international break the EPL is back this weekend, starting with a bang on Saturday, as Tottenham host Liverpool in the early kick-off.

High-flying Watford face a difficult match against Manchester United, while Sunday could bring a first win for two struggling teams, Burnley and West Ham, as they travel to Wolves and Everton respectively. The action runs through to Monday night where Southampton host Brighton in a Southern clash.

There’s no doubt which match is the pick of the bunch this weekend. Tottenham surprisingly dropped their first points of the season to Watford two weeks ago, but Liverpool have made no such mistake so far. This is a chance for Spurs to get back to winning ways at the expense of a direct rival.

Spurs dropped points in their last match meaning today’s opponents are one of just three teams to maintain a perfect record. Perhaps that will serve as a wake up call for manager Pochettino, as Tottenham have somewhat coasted through the previous games, and were at times lucky to emerge with a win.

Christian Eriksen was once again instrumental for his country during the international break, where two goals took his tally to 15 in his last 18 games for Denmark. He is yet to get off the mark in the league this season however. Deli Alli is racing to get back to fitness after picking up a knock last week, but Spurs will be happy to have Heung-Min Son back in the team. He could start, but it’s unlikely Pochettino will drop Lucas Moura, who has taken advantage of his chance at a run in the team with three goals in four games. He will be well rested and if Spurs are to succeed here, he could once again be the man to lead the charge.

Like Tottenham, Liverpool have a number of players who featured heavily during the international break. Adam Lallana is one who didn’t feature, but he will be unavailable, after picking up an injury in training for England.

The Reds have a perfect record in the league so far and have their ever improving defensive resilience to thank. Virgil van Dijk is the man commanding that area, but much credit should also go to Joe Gomez, who has slotted in next to van Dijk in Dejan Lovren’s absence, and has barely made a mistake. Fabinho could make his first league start as Klopp has one eye on next week’s Champions League match, but it is unlikely that the league’s most dangerous trio upfront will be rested.

Prediction: Both teams to score – Liverpool have conceded just once this season but Tottenham have to get a result here. With fatigue perhaps a factor, we see goals at both ends of the field.

There’s loads of action taking place over the whole weekend. Our match of the day is the early kick-off on Saturday, while Watford against Manchester United rounds off the action on Saturday. There are two games on Sunday, along with a Monday night fixture between Southampton and Brighton.

Bournemouth have had a decent start to the season, but a reality check came in the form of defeat to Chelsea two weeks back. This is a more winnable fixture, but the Foxes have been much tougher to break down this season.

Leicester sit just a point behind Bournemouth so a win here will see them leapfrog the Cherries. Difficult opening fixtures saw Leicester play Liverpool in their last match, but the Foxes held their own, and have shown signs of improvement all over the pitch.

Prediction: Leicester Draw no bet – Leicester have looked solid and their defeats came against Manchester United and Liverpool, so they have every chance here.

One of three teams with a perfect record intact, Chelsea look the most likely to make it five wins from five, with a very favourable fixture here. Sarri’s style of play is falling into place quickly, while Eden Hazard seems to just get better and better.

Cardiff are still looking for their first win, but will be very hard pressed to get it here. Neil Warnock will set his team up to frustrate Chelsea, but with the Blue’s attacking talents, surely Cardiff will have to score at least one to even have a chance here.

Prediction: Chelsea -2 Handicap – Chelsea are looking better with every game and we fancy them to win comfortably here.

Huddersfield are another team looking for their first win. They are unbeaten in their last two, after earning a decent draw away to Everton in their last match, and may see this as a winnable fixture.

Palace have played well so far, but the results haven’t been great. Much will depend on whether Wilfred Zaha is passed fit to feature here. Early reports suggest he has returned to training and will be available.

Prediction: Under 2.5 goals – This could be a tight one, with Huddersfield finding it very difficult to score so far this campaign.

City returned to winning ways in their last match but it was much more difficult than most expected. It looked like City were about to demolish all in their path after putting six past Huddersfield, but they have struggled since then. This is – on paper at least – a game they should comfortably win.

Fulham have had a satisfactory start to the campaign, but now face a tough run of fixtures, starting with perhaps the toughest here. Few will expect them to get much here and the betting odds reflect that.

Prediction: Manchester City Win + Over 2.5 goals – City should win this and with their defence far from solid lately, there should also be a number of goals.

Newcastle’s results have been poor, but the performances have been spirited. That reflects the problems at St James’ at the moment, with effort plentiful, but talent not so much. This is another tough fixture, but the home crowd at St James’ is a massive asset.

After back-to-back defeats, Arsenal have now had back-to-back wins. The fixture list is kind over the coming weeks, so there’s no reason the Gunners can’t go on a great run. The defence remains a shambles though and if Emery doesn’t sort that out soon, Arsenal will continue having to outscore opponents.

Prediction: Both teams to score – We can’t see Arsenal’s defence improving immediately, so expect goals at both ends.

Watford maintained their perfect record after a hugely impressive win against Tottenham in their last match. It doesn’t get any easier here, but the Hornets will be on a high, and there’s no reason why they can’t do it again.

United returned to winning ways, but Burnley offered little opposition two weeks back. It’s not certain whether Mourinho’s men have improved then and they will be without their player of the month, Luke Shaw, after he was injured and is being treated for concussion after playing for England.

Wolves got their first win of the season with a last gasp winner against West Ham two weeks back. The victory was deserved and Wolves look like they could fulfill the high expectations many had pre-season.

Burnley’s Europa League dream came to an end, but their Premier League nightmare continues. They were lacklustre against Manchester United two weeks ago and will need to significantly improve here.

Prediction: Wolves Win – There’s no reason why Wolves won’t continue their good form and win against an out of sorts Burnley.

Everton are unbeaten, but they’ve drawn three of their four games. Richarlison will miss this one through suspension and Theo Walcott is out injured, so the Toffee’s attacking threat could be lower than usual here.

That will be good news for West Ham, whose defence is just as shambolic as last season. Pellegrini has started his tenure with four defeats in four games after spending big during the summer. If results don’t improve quick, then the West Ham board could have another big decision on their hands.

Prediction: Both teams to score – West Ham can’t keep a clean sheet, but they are better up-front. The Hammers simply can’t afford to lose here.

The Saints got their first win of the season against Crystal Palace last week. It’s been a somewhat slow start, but Southampton are looking much better, and seem to finally have found a regular goal scorer in Danny Ings.

Brighton have been a mixed bag so far. An impressive win against Manchester United was followed by a defeat and a draw, so the Seagulls are proving difficult to predict. Away from home here, they are definitely the underdogs.

Prediction: Southampton Draw no bet – Southampton are looking more solid with each game and finally seem to have found their shooting boots up-front.

Place a bet on this at Karamba

Karamba are our bookie of the week. To find out all you need to know about Karamba you can read our Karamba review. 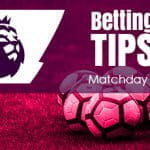