And here we are – the final day of the 2017/18 Premier League season awaits us this weekend. And what a season it has been.

Manchester City have broken records on their path of almost total domination, losing just two games along the way. But there are still some questions to be answered, can the rampant Blues end the season on 100 points? Will they add to their astonishing 105 goals scored this season and could they play a part in the most astonishing escape from relegation ever?

As we approach the final fixtures, Stoke and West Brom are definitely relegated. Swansea are on the verge of joining them, needing a 10 goal swing in goal difference to catch Southampton. At the top of the table, Liverpool fans face an anxious afternoon and need at least a draw at home to Brighton to guarantee a top four finish. For the last time this season, it’s showtime!

It’s now or never for Swansea. After losing in the six-pointer to Southampton, the Swans need to win and win well and hope that Manchester City score a lot of goals against Southampton. Swansea can catch the Saints points tally but have a vastly inferior goal difference.

It would take an incredible turn of events for Premier League football to be played at the Liberty Stadium next season. Going in to the final day of the year’s competition, Swansea trail nearest rivals Southampton by three points but crucially Southampton have a goal difference of -18 while the Swans have a goal difference of -27. This means a swing of 10 goals is required for Swansea to stay in the top-flight.

Can Swansea do the impossible? Bet on Swansea v Stoke at 888sport!

After the final whistle on Sunday, Swansea will look back at the disastrous defeat against Southampton with bitter regret. A win in that vital six-pointer would have almost guaranteed their safety and pushed Southampton to the brink of the Championship. However, eight games without a win is relegation form and that is the likely outcome on Sunday.

A glimmer of hope for Swansea, and it is only a glimmer, is the fact that Southampton play the irrepressible Manchester City on the final day. City have been scoring goals for fun, with 105 already scored this season. If City are in the mood and Swansea do their part against already relegated Stoke City then the most unlikely chapter in this year’s action could be written. But this is where reality sets in, Swansea haven’t scored a goal in six of the last eight games they have played in. Swansea’s manager Carlos Carvalhal is leaving at the end of the season and the chances are his replacement will be managing a Championship team.

Prediction: Under 2.5 goals – Swansea’s misfiring strikers will struggle against an already relegated Stoke City. Stoke will play with a new found freedom and frustrate Swansea.

Whilst the destination of the title was established a long time ago and the identities of two of the three relegated clubs are already known, some teams can really enhance their league position on the final day. The prize money is increased by £2 million per position so there is more than just pride to play for.

What an incredible season Sean Dyche’s Burnley has had! Many tipped them for relegation this season but instead they have beaten the likes of Everton, West Ham, Newcastle United and Chelsea at Stamford Bridge to secure a top seven finish and guarantee European football for next season. There will be a party atmosphere at Turf Moor and the Clarets will want to put on a show for their fans.

Bournemouth’s early season form seemed to suggest they would struggle, losing their first four matches. However Eddie Howe has turned Bournemouth into a team that is hard to beat and they never really looked in any danger of relegation. Recent form has been patchy for Bournemouth and they will struggle to lift their game with nothing to play for.

Prediction: Over 2.5 goals. Party time at Turf Moor as the Clarets celebrate achieving European football for next season. 3-0 to Burnley.

Huddersfield’s vital 1-1 draw against Chelsea secured their Premier League status for another year and they will need to learn lessons from this campaign if they are to avoid another relegation scrap next year. They started the season well with wins against Crystal Palace and Newcastle United but their form towards the end of the season was woeful.

Arsenal have inexplicably suffered with travel sickness since the start of the year and incredibly they are the only team out of the 92 in the league that haven’t picked up a single point on the road this year. If it wasn’t for their excellent home form (won 15 with 2 draws and 2 losses) then Arsenal would be much further down the table. In Wenger’s last game in charge they will get that long awaited point.

Prediction: 1-1 draw. Arsenal’s away form is the stuff of nightmares but they will avoid defeat in Arsene Wenger’s last game in charge of the Gunners.

It is understandable with a Champions League final on the horizon that Liverpool’s league form has faltered somewhat. A 1-0 defeat at the hands of closest rivals Chelsea and disappointing draws against Stoke and West Brom have put Liverpool in danger of missing out on fourth place and a Champions League spot. They need a point to see off Chelsea, something they will do with ease on Sunday.

Brighton could finish as high as 10th in the Premier League if results go their way, this is a remarkable feat for a newly promoted team. They have produced some surprising results this year beating Manchester United, Arsenal and gaining a very credible draw against Tottenham. They will try to frustrate Liverpool at Anfield but with Liverpool needing a result it would be a surprise to see anything other than a routine Liverpool win.

Prediction: Over 2.5 goals – Mo Salah will guarantee the Golden Boot award with a brace as Liverpool run out easy winners.

Despite finishing second behind rivals City, United’s recent games have been poor. Without the injured Romelu Lakaku, United look one dimensional and lack creative spark. Recent defeats against West Brom and Brighton suggest the season ended at the right time for United, a few more fixtures and they could well have been caught in the top four race.

Watford are one of four teams who are sat on 41 points and will look back at this season with a great deal of satisfaction. Recent form however is a concern with just one win in five. There are question marks over manager Javi Gracia, this could be his last game in charge of the Hornets.

Prediction: Under 2.5 goals. Manchester United to win ugly. Another flat display by the Red Devils will see them win the game 2-0.

The recently promoted teams have all done exceptionally well this season and for only the third time in Premier League history they have all secured top-flight football for next season. Whether Newcastle can extend that stay to another year depends on securing the services of Rafa Benitez. His experience was vital this year as he guided the Magpies to a mid-table finish.

Chelsea never realistically looked like challenging for the title this year, a title they won so convincingly the year before. Their slim Champions League hopes all depend on Liverpool failing to get any sort of result against Bournemouth and Chelsea beating Newcastle. Part of the issue seems to be the erratic form of striker Alvaro Morata who started in sensational form but went three months mid-season without scoring a single goal.

Prediction: Draw – Chelsea will be desperate to get goals in their quest for Champions League football allowing Newcastle to counterattack.

Southampton will be well aware that a very heavy defeat could put them in danger of being relegated, no matter how small that possibility is. So expect to see very little attacking intent on show from Southampton at St Mary’s.

Manchester City have been simply outstanding this year and will want to end the season in style by reaching 100 points, a feat they can achieve with three points against Southampton. The 0-0 draw at home to Huddersfield was a surprise but that result was nestled in between a 4-1 win against West Ham and a 3-1 win against Brighton. City will win this one but it won’t be by the scoreline many expect.

Prediction: Under 2.5 goals – City will reach the magical 100 points tally but will struggle to breakdown a team that is defending for their lives.

With Champions League football already secured, this fixture will be all about Harry Kane’s trying to catch up to Liverpool’s Mo Salah in the race for the Golden Boot. Kane is currently three behind the Egyptian and will fancy his chances of a goal or two in this fixture.

Leicester have been a punter’s nightmare this season with form so erratic that only a brave person would include them in an accumulator. Recent form continues this pattern, they were hammered 5-0 by Crystal Palace, beaten 2-0 by West Ham and in their last game they beat Arsenal 3-1.

Prediction: Harry Kane to score a brace in an easy win against an inconsistent Leicester City team.

Selhurst Park has to be one of the most intimidating places for a team to visit and they welcome a team that has already had relegation confirmed and have nothing to play for. Palace are unbeaten since their defeat to Liverpool at the end of March and I expect that run to continue.

West Brom will feel hard done by with relegation and in fairness to the Baggies they gave their all in the final few weeks of the season. A surprise win at Old Trafford over Manchester United was followed by victories over Newcastle and Tottenham and a great 2-2 draw with Liverpool. Heads may drop as the realisation of relegation hits home.

Prediction: Crystal Palace win + over 2.5 goals – Palace will hold their nerve in a high scoring encounter.

West Ham fans were finally able to breath a huge sigh of relief when their 2-0 win away at Leicester ensured Premier League survival. They have been on the receiving end of some heavy defeats and the 67 goals they have conceded is joint worst in the league, equal with relegated Stoke City.

Everton are assured of a top ten finish this season and they have been steady rather than spectacular. Wayne Rooney is expected to join DC United in the summer after agreeing a ‘deal in principle’. The former Everton schoolboy hasn’t made much of an impact since his high-profile return to the Toffees.

Prediction: Over 2.5 goals and an Everton win – West Ham’s defenders will struggle against Everton’s front line.

Place a bet on this at 888sport

888sport are our bookie of the week. To find out all you need to know about 888sport you can read our 888sport review. 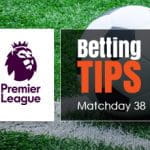