With the season racing to an end, many teams will play twice over the next week, as they make up the game in hand they have over other teams.

That game in hand could see Tottenham leap-frogging Liverpool into third place, but it’s at the bottom of the table where many teams will hope that game gives them the advantage they need to see themselves to safety.

Chelsea’s chances of making the Champions League spots have long been written off by most. But, with Liverpool slipping up twice in the last two games, Chelsea could push them right through to the end, starting with a win here.

Three wins in a row have given the Blues a small chance of making that fourth spot. They still need Liverpool to drop points, but beating the Reds here will keep the pressure on.

It’s fair to say this season hasn’t exactly panned out how Chelsea fans would have expected after winning the title last year. They most probably won’t make the Champions League next season and should they lose the FA Cup final to Manchester United, the season can only be written off as a big disappointment. Where that will leave Chelsea remains to be seen. Antonio Conte has hardly confirmed he will remain in the role next season, so there could be big changes in West London. The reverse fixture of this match was a score draw at Anfield and Chelsea have the advantage here of facing a Liverpool team fraught with injuries and possibly fatigued from their Wednesday night Champions League match.

That Champions League match could prove to be an advantage to Liverpool though, as they are on a high after Wednesday night saw them through to the Champions League final where they will face Real Madrid. The Reds might have lost the second-leg against Roma – their first defeat in the competition – but that won’t matter, as they went through 7-6 on aggregate.

That score shows that it was a drama filled night in which Liverpool made a number of defensive mistakes and qualifying for the final perhaps masks some of Liverpool’s performances in recent weeks: three draws in their last four league matches, including draws against the two bottom teams in the league, have meant that opponents Chelsea can still mathematically steal fourth place. It’s unlikely though and with the pressure of that semi-final out of the way, Liverpool will look to put that issue to bed. Mohammed Salah has blanked in his last two matches in all competitions, so expect the Egyptian to be hungry for goals as he looks to stay at the top in the race for the golden boot.

Prediction: Both teams to score – Liverpool’s defending leaves a lot to be desired but they are irresistible at the other end. This is a must win game for Chelsea and we could be in for a cracker.

Brighton are on a horrible run that has seen them without a win in six games. Safe from relegation, they should play with some freedom, but it’s just not happening for the Seagulls of late.

Manchester United scored a late winner to beat Arsenal last weekend to keep up their good form as they finish the season strongly. The Red Devils have won seven of the last eight league matches, but will be without Romelu Lukaku here, with the striker injured in the last match.

Prediction: Manchester United win – United are without Lukaku, but have plenty of attacking options in reserve and are on a good run of form.

There can be no more second chances for Stoke. Although they haven’t lost any of the last three, they now have to win. A draw will still see them with an outside chance, but it will leave them having to win their last match and their fate ultimately in the hands of others.

Roy Hodgson can be congratulated for a job well done at Palace. Two wins and two draws in the last four has seen them move safely away from the relegation zone and last week’s five goal thrashing of Leicester shows how far Palace have come after a shocking start to the season.

Prediction: Crystal Palace – It’s a must win match for Stoke, but we think they will come undone against Wilfred Zaha and Palace’s attacking talents.

Bournemouth seem to be slowly lurching towards the end of the season having been safe for a while. Without a win in five, last week’s loss to struggling Southampton was just another disappointing result of late.

Swansea are safe as it stands, but Southampton are just one point below them and look set to pick up points. A win here would ease a lot of minds at the Liberty then and put Swansea in a strong position to assure safety. The caveat is that Swansea haven’t won since the beginning of March, with three draws and three defeats in their last six.

Prediction: Under 2.5 goals – A win for Swansea would be invaluable and they will look to keep the match tight for as long as possible, as they are finding it difficult to score goals themselves.

Leicester were thrashed by Palace last weekend – their third defeat in four games – and seem to have completely downed tools. Resigned to their fate of a mid-table finish, will the players find any motivation here?/p>

West Ham will be hoping Leicester approach this game in the same manner. The Hammers desperately need a few more points to take the pressure off and with Manchester United and Everton waiting after this game, David Moyes will probably feel his best chance of points lies here.

Prediction: Both teams to score – West Ham have one of the league’s worst defensive records but they too must try to win this match and go for goals.

Watford’s poor run continues with their fifth defeat in seven games. Javi Gracia’s attempts to firm up the defence haven’t worked well then, but just as worrying is the fact that the Hornets have scored just three goals across those seven games.

Newcastle’s excellent run of results over March and the first half of April have seen them safe but they must be cautious not to down tools too early. A top half finish should be the goal now, but the Magpies will need to improve to avoid their third consecutive defeat.

Prediction: Draw – The honours are likely to be shared between two teams struggling for goals and with little to play for.

Darren Moore has worked wonders at West Brom but is it too little too late? The Baggies have two games remaining and must win them both, along with other results going their way, to have any chance of staying up.

With Liverpool slipping up over the last couple of games, Tottenham could finish the season in third place. Spurs have been solid in the second half of the season, losing just once in the league since December 2017 to Manchester City a few weeks back.

Prediction: Tottenham win – West Brom have to win or they’re relegated but it will require some effort to beat a Spurs team in such good form.

Complacency seemed to be setting in at Goodison but the players have turned things around with a string of good results. It’s too late to catch Burnley and earn a Europa League place, so the question is, can they keep it up?

Southampton finally got a win last week and now it’s crunch time. The Saints have three games left, the last of which is against Manchester City. That means this one and next week’s six pointer against Swansea will likely ultimately decide their season. It really is now or never for the Saints.

Prediction: Under 2.5 goals – Everton have sorted things out at the back and should be able to frustrate a Southampton team that will be looking for goals.

Despite winning the league weeks back, City seem to have found the motivation to even improve their performances. Three wins in three, scoring twelve goals in the process, shows how dangerous they still are.

Huddersfield have three games left but they’re all daunting. After City, Chelsea then Arsenal await. That means there’s a very real possibility the Terriers won’t pick up any more points this season, so David Wagner will be paying very close attention to the results of the teams around him.

Prediction: Manchester City win + over 2.5 goals – City are scoring for fun and there’s no reason to suggest they won’t comfortably win this one by a big margin.

Arsenal were unlucky to lose at Old Trafford on Sunday despite Wenger playing a team full of youngsters, as he prioritises the Europa League. Opponents Burnley can still finish ahead of Arsenal, so it’s important the Gunners keep up their strong home form.

Sean Dych should be congratulated for a job well done as Burnley have assured themselves of European League football next season. It’s a great achievement, but the Clarets could still finish above Arsenal in sixth, so expect them to go for it here.

Prediction: Arsenal win – Arsenal’s home form is formidable and they should manage a win here.

Betfred is our bookie of the week. To find out all you need to know about Betfred you can read our Betfred review. 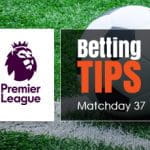