As we head into matchday 36 of the 2017/18 Premier League season, although things are mostly wrapped up at the top of the table, we’re entering crunch time for the many teams still fighting for survival.

Stoke City have just three games left but know they must win at least two of those to stand any chance of staying up. Southampton too must win at least two of their four matches and have a favourable home fixture against Bournemouth. West Ham, Swansea, Huddersfield and Crystal Palace all play too and could end both Southampton and Stoke’s hopes should they manage a win.

There’s little more to play for in the league this season for both these teams, but nevertheless, the rivalry between Arsenal and Manchester United should ensure this remains a fiery match and for that reason it’s our match of the day.

Manchester United looked set to end the season incredibly strongly, beating Chelsea, City and Liverpool while on a run of six consecutive wins in a row. That came to an end with a shock loss to rock-bottom West Brom two weeks ago, but United have bounced back, after Mourinho rotated his team, making it through to the FA Cup final and beating Bournemouth in the last league match.

It has been a strange season for Mourinho and much of the off the pitch debate has shadowed what hasn’t necessarily been a bad season for United. Coming second in the league to Manchester City is nothing to be ashamed of and Mourinho has reached an FA Cup final, meaning silverware is still within reach. But, many of the big signings have been disappointing and there could be big changes again this summer. Alexis Sánchez has started to hit form, but Paul Pogba has had his fair share of critics this season, while Romelu Lukaku’s 16 league goals are far behind strikers for the other big teams, such as Salah, Kane, Agüero and even Jamie Vardy. United have been defeated just once in the last eight games coming into this one, so will be confident of victory.

Arsène Wenger rocked the footballing world last week with the news he would leave Arsenal at the end of the season. After over 20 years with the club and a range of titles, Wenger received praise from some of football’s greats for his achievements at the club.

The team reacted well to the news and comfortably beat West Ham last week. In truth though, the goal for players and manager is to win the Europa League. The first leg of that match takes place on Thursday before this game, so we are likely to see some rotation here. Arsenal’s league form has increased significantly recently. After a string of three defeats in a row in February and March, The Gunners won three in a row, before losing to Newcastle, then returning to winning ways against West Ham last weekend. That means that both teams head into this match with four wins in their last five games.

What a performance Liverpool put in on Tuesday night! Leading 5-0 against Roma in the Champions League semi-final, conceding two in the last ten minutes means the tie isn’t over, but Liverpool should make it through to the final. On a high and playing well, they should make no mistakes here.

Stoke earned their second draw in a row against Burnley last week, but once again, they let a lead slip. Had they won both of those games, they’d be within touching distance of getting out of the relegation zone, but as it stands, defeat here could all but condemn them to the Championship next season.

Prediction: Liverpool -1 Handicap – Liverpool are so strong at home that they should comfortably emerge winners here.

Burnley were on a cracking run of five victories in a row, but Chelsea and then Stoke have put an end to that party, Nevertheless, Burnley are ending the season strongly and currently occupy 7th place, which could earn them a Europa League spot next year.

Brighton should be safe, but they could and should have made it mathematically so weeks ago. A torrid run of just two points from the last fifteen has put them back into the mix, so the Seagulls need to make sure they see the season out to the end.

Prediction: Burnley win – Burnley are strong at home and with Brighton on such a bad run, they should win this match.

Palace are another team that need a result or two to see themselves safe, but unlike Brighton, they’re in decent form. They could get that win here, as Leicester seem to have given up already.

Leicester have really dropped off and are slowly slipping down the table. With little to play for, it’s understandable, but the Foxes owe it to their fans to put in some better performances.

Prediction: Crystal Palace Draw no bet – Palace have the momentum and will to find a win and get over the safety line and there’s a strong chance that could come here.

One of three teams on 35 points, Huddersfield are in the more precarious position due to their remaining fixtures after this being against Manchester City, Chelsea and Arsenal. They could easily lose all three of those and this is their best shot to get a win and reach safety.

Unlike the other mid-table teams around them, Everton seem to picking up momentum rather than winding down for the season. They’ve lost just one of their last six and that came against Manchester City, so are proving tougher to beat of late.

Prediction: Under 2.5 goals – A point is still valuable for Huddersfield and could prove vital, so they will look to keep things tight here.

Newcastle have assured themselves of survival already after a fantastic run, but fell to defeat against Everton on Monday night. They’ll be fancied to win here though against bottom of the table West Brom.

The Baggies are unbeaten in three games but still need nothing short of a miracle to survive. They looked dead and buried against Liverpool but came back from two goals down to earn a draw and will need to draw on that fighting spirit against a confident Newcastle team.

Prediction: Both teams to score – West Brom have managed to score in each of their last six games and have to go for goals, but Newcastle will also surely find a way through the Baggie’s defence.

It’s crunchtime for Southampton and no more mistakes can be made. Exit from the FA Cup means there are no distractions, but the Saints will have to win at least two of their four remaining games. They have their best chance of a win here and they must do so to get them off on the right foot on the run in.

Bournemouth are the team that will try to stop them. The Cherries have lost their last two and are another team that could stroll to the end of the season, having little left to play for.

Prediction: Both teams to score – Southampton will go for the win while Bournemouth have scored at least once in all but two of their last 16 games.

Swansea are the team most at threat of either Stoke or Southampton leapfrogging them out of the relegation zone. Currently four points clear of those two teams, they need another win or two, but it will be difficult here. Swansea actually play both Stoke and Southampton in their final two matches, so it could come down to the wire.

Chelsea look sure to miss out on Champions League football next season but they have put together back to back wins in the league and made it to an FA Cup final. Antonio Conte will want to finish the season strongly as it could perhaps be his last as Chelsea manager.

Prediction: Chelsea win – Swansea were comfortably beaten in their last match and are without a win in five.

West Ham have four more matches to get a win and secure survival, but like Huddersfield, they have very tough fixtures which will make it difficult for them to do so. This is the most difficult of the bunch and few will expect the Hammers to get anything here.

City, despite already being champions, were ruthless against Swansea last week. Still showing the class that allowed them to stroll to victory in the title race, even if Pep rotates many players, it’s still likely City will cruise to victory here.

Prediction: Manchester City -1 Handicap – It should be tighter than City’s last game, but City should still score multiple goals on their way to a wain.

Despite winning neither of their last two matches, Spurs have a kind run in that should see them comfortably finish in the top four. Harry Kane is still chasing the golden boot while Spurs are just a win behind Liverpool with a game in hand.

Watford earned a draw but it was another uninspiring performance on their journey slipping down the table. Just two points from their last six games is very poor, so it’s a good job that Watford had already ensured survival prior to this run.

Prediction: Tottenham Win + Both teams to score no – A Spurs victory is on the cards while Watford have failed to score in their last two games.

Place a bet on this at Sport Nation 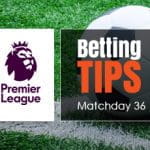