As we go into matchday 35 of the 2017/18 Premier League season, it’s finally official: Manchester City are champions. Manchester United’s shock defeat at home to West Brom handed City the title after the Citizens comfortably beat Tottenham themselves. A huge congratulations to the City team who have simply been too good this year..

Manchester United are one of the many teams not to feature this weekend, as we have the FA Cup semi-finals over the weekend. That means there are just six games this weekend, starting on Saturday and going through to Monday night. Nevertheless, we’ll bring you all you need to know and the best betting tips for the weekend’s limited action.

Our match of the day is a London derby, as West Ham make the trip from East to North London to face Arsenal. The Hammers are still not assured of safety and their remaining five fixtures are tricky. David Moyes would like to pick up points as soon as possible to relieve some of the pressure currently on the Hammers.

Arsenal had started to pick up form with three wins in the league and impressive performances against AC Milan and CSKA Moscow in the Europa League, which saw them through to the semi-finals in the competition where they will face Atletico Madrid.

However, a shock defeat to in-form Newcastle last weekend has taken the wind out of the Arsenal sails somewhat. Injuries to Aaron Ramsey and Henrikh Mkhitaryan, with the Lithuanian out for the rest of the season, have stifled midfield creativity. Things look a bit more rosy up-front where the strike partnership of Pierre-Emerick Aubameyang and Alexandre Lacazette is already proving dangerous. The former has scored six goals in eight league starts for the Gunners, while Lacazette has notched twice in the three league games he’s played since returning from injury. Those two could cause all sorts of problems for West Ham, whose defence is far from assured even at the best of times, even if Joe Hart retains his place in goal, despite making another howler that lead to Stoke’s goal in their last match.

Bet on the match of the week between Arsenal and West Ham at bet-at-home.

Joe Hart’s aforementioned mistake could still prove costly for West Ham, but it could have been so much worse. In a game the Hammers dominated and had three goals disallowed in, it was the visitors, Stoke City, who took the lead, after Hart spilled a weak shot from Shaqiri. His blushes – and West Ham’s survival hopes – were saved by a late Andy Carroll equaliser.

With Carroll back fit David Moyes has a wealth of striker options to choose from himself. The manager has preferred Marco Arnautovic in the lone forward role and rightly so; the Austrian has been instrumental for West Ham and has nine goals since playing for Moyes. Manuel Lanzini is also back from injury and came on from the bench in the last match against Stoke. David Moyes has options then and the attacking talent in West Ham’s ranks defies their lowly Premier League standing. Another win should be enough to ensure safety, but it won’t be easy. After Arsenal, West Ham face Manchester City, Leicester, Manchester United, and then Everton on the final day of the season. West Ham have been digging in, but the hard work is far from over.

Prediction: Arsenal win – West Ham will fight and with players returning from injury, they are stronger than ever. However, defensive frailties, especially with the goalkeeper, mean that Arsenal will get plenty of chances to score.

West Brom earned their first win since mid January against Manchester United last weekend. It was an impressive achievement and at least keeps the possibility of survival alive, but it’s still a big ask. This will be an even tougher ask, especially as Liverpool will know a win will see them leap-frog the Red Devils into second place, at least temporarily.

Another routine win in which all three of Liverpool’s deadly attackers got on the scoresheet followed passage through to the Champions League semi-finals. Liverpool are finishing the season strong and there’s little to suggest they will slip up here.

Prediction: Liverpool -1 Handicap – Liverpool rarely do single goal wins and they will be buoyed by the fact that a win will put them into second.

Watford have picked up just one point from the last fifteen, as they slowly slip down the table. Opponents Crystal Palace are one of the many teams below them that are rapidly catching up and the visitors will go level with Watford on points should they win here.

Wilfred Zaha’s return well and truly has turned things round for Palace. His two goals earned Palace an important win against local rivals Brighton last weekend, while a goal the previous week helped earn a draw. Palace are still far from safe, but they four friendly fixtures, with two of those against opponents below them in the table, so they should be fine.

Prediction: Watford clean sheet no – With Zaha in such fine form the Watford defence will have a hard day’s work ahead of them.

Stoke were just minutes away from earning just their second victory under Paul Lambert. Those three points could have turned Stoke’s season around and inspired a fight to the end for survival. The Potters are currently five points from safety, so will need to win a minimum of two of the four remaining games.

Chelsea brought Burnley’s fantastic winning run to a halt on Thursday night, as Burnley failed to take their chance to overtake Arsenal into sixth place. Nevertheless, Burnley have won five out of their last six matches and went down fighting against Chelsea. Expect them to bounce back here.

Prediction: Burnley Draw no bet – Burnley are finishing the season incredibly strongly and scoring goals more regularly. They should easily avoid defeat against a Stoke team that has won just once this year.

They might not have expected it to happen this week, but Manchester City have been crowned champions. The Citizens have been head and shoulders above all the other teams this season and deserve the title. A visit from Swansea shouldn’t usually pose any problems but Guardiola will likely grant some youngsters playing time.

Swansea’s great run has slowed a little and the Swans may feel they have missed opportunities lately, especially by drawing against both Huddersfield and West Brom, where victories would see them already safe. Nevertheless, Swansea are safe as it stands, but will likely need at least one more victory.

Prediction: Over 2.5 goals – Guardiola will likely rest some key players but there will still be goals in this victory lap of a match for Manchester City.

Everton nearly nicked a win against Swansea last week but were eventually held to a draw. Everton have little to play for, although today’s visitors can overtake them with a win.

Newcastle have not only assured themselves of another season in the Premier League but have also shot up the table after a string of four wins in a row. It’s a fantastic achievement, especially after beating Arsenal last week and Rafa’s men will be full of confidence heading into this one.

Prediction: Both teams to score – Newcastle will be the ones pushing for the win and we see goals at both ends.

Place a bet on this at bet-at-home

Bet-at-home is our bookie of the week. To find out all you need to know about bet-at-home you can read our bet-at-home review. 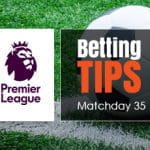