What a week of football we’ve had. After Manchester United pulled off a magnificent second half comeback to deny neighbours Manchester City the title last week, heroics were also seen in the Champions League in midweek, as Liverpool eliminated City and Roma came back to knock Barcelona out of the competition with a 3-0 victory.

Let’s hope that the fireworks continue in the Premier League this weekend. There are certainly plenty of occasions, with many teams playing in midweek next week to account for games missed due to cup fixtures. We’ll cover the weekend’s action here though, starting with Southampton hosting Chelsea in the early kick-off, going through to Monday night, where West Ham host Stoke.

Once again, Manchester City will have the chance to win the league with victory, although they’ll need West Brom to hold Manchester United as well as winning here. But it won’t be easy; Tottenham have the current longest unbeaten streak in the EPL of any team.

Spurs couldn’t have hoped for a better time to face Manchester City. In the last three games, City have lost twice to Liverpool in the Champions League, being knocked out by 5-1 on aggregate, while also losing to neighbours Manchester United last weekend, despite heading into the second half with a 2-0 lead.

But aside from City’s poor recent results, Spurs can go into this one with confidence anyway. They are currently fourteen games unbeaten in the league, with eleven wins and three draws. Despite being knocked out of the Champions League themselves during this period, Spurs have kept up their domestic form and look set to assure themselves of qualification for that tournament next season in the coming weeks. Harry Kane’s sooner than expected return from injury was welcome news and the striker bagged a goal last weeekend. As always, he’ll be the focal point of the Spur’s attack, but Christian Eriksen is the current form man, with three goals in his last three games. All in all, Tottenham will be confident of delaying City’s celebrations once again.

What a poor week for Manchester City. In a season where it looked like the Citizens could be challenging for four trophies, Pep Guardiola’s team has underachieved and been knocked out of the Champions League at only the quarter-final stage.

City could have also won the league last weekend against Manchester United. They looked like they were going to do just that, before three second half goals from United turned things around. That was poor preparation for the vital second leg of the Champions League match against Liverpool, where City needed to overturn a 3-0 deficit. They started well, but faded, and now need to get back to it with a tough match. City will still undoubtedly win the league this year and deserve credit, but the celebrations will now have a somewhat bitter taste. Win this difficult match here and it would be a little sweeter, but this will be another tough match for Guardiola.

Prediction: Tottenham win – Spurs are on a magnificent run and while Manchester City are undoubtedly the best team in the league on their day, they are on a bad run, shot for confidence and playing away from home here.

Southampton were unlucky against Arsenal but with time running out, they can ill afford any more defeats. Chelsea are hardly ideal opponents when in need of such a victory, but the Blues are also struggling. With Charlie Austin and Shane Long back fit and scoring goals, Southampton could pull out a surprise here.

Chelsea missed numerous chances to kill off West Ham last week but their inability to do so allowed West Ham a route back into the game and the match ended in a draw. That draw meant Chelsea have won one of their last five and there’s a genuine chance they could soon slip below arsenal into sixth place if they don’t pick up form quickly.

Prediction: Both teams to score – Southampton are taking a more attacking approach and scoring goals with their strikers back fit, but they are also conceding goals regularly.

Many thought Leicester would be pushing for seventh and a potential Europa League spot, but instead it’s Burnley who look favourites to do so. Four wins on the bounce has seen Burnley back in form and with home advantage, they are slight favourites here.

A win for Leicester would reignite that race for seventh place though and put the Foxes just a couple of points behind the hosts. A disappointing loss to Newcastle last week could be a one off, as the Foxes were unbeaten in the four previous games, winning two of them.

Prediction: Over 2.5 goals – Both teams are getting on the scoresheet and not keeping clean sheets while there should be an edge to this game despite it being a mid-table battle.

More late goals robbed Palace of three points again last week. It’s a recurring theme for the Eagles, who need to shape up defensively if they’re to stay up this season. One win in seven games isn’t the best form heading into a vital point in the season, but Palace aren’t playing bad and have been unlucky in many of those defeats.

Brighton should really be over the line in terms of staying up, but a couple of defeats followed by them being unable to beat Huddersfield last week has meant that at least one more win is needed. It could come here, though Palace will be fighting for every ball.

Prediction: Crystal Palace Draw no bet – Palace can’t afford to lose here while Brighton have won just twice away from home all season.

A great point against Brighton meant Huddersfield kept their heads above water last week, though they still sit just four points above the drop zone. Home games are key in the run in and Watford are struggling of late, so Huddersfield should really go for what would be a hugely significant three points.

A poor run has seen Watford slip to twelfth place. There’s surely no risk of the Hornets going down, but they need another win to ensure that. It could come here, but Watford have lost three of the last four games, conceding twelve goals in the process.

Prediction: Under 2.5 goals – Watford have shipped goals lately but Huddersfield’s attack is weaker than recent opponents and the Hornets should focus on tightening up here.

Swansea must have been disappointed with only managing a draw against rock bottom opponents West Brom last week. The Swan’s fight continues and two more wins should keep them up, but Swansea have managed just one win in their last five matches, while only drawing with fellow relegation battlers West Brom and Huddersfield.

Last week’s merseyside derby was a dull affair with a point the most deserved by both teams. Everton seem to be slowly trudging to the end of the season and must be careful they don’t switch off completely, as they look set for a mid-table finish.

Prediction: Swansea Draw no bet – Swansea have lost just two of their last ten league games, one of which was to Manchester United. Fighting for survival, they must avoid defeat.

Liverpool faced intense first half pressure in Tuesday’s Champions League match, but goals from Salah and Firmino saw them safely through to the semi-finals. On a high from that victory and with Salah back fit, they are sure to win here.

Bournemouth have had to battle to draw their last two matches, so it’s a credit to Eddie Howe’s mens’ fighting spirit. A match at Anfield is about as tough as they come, but Bournemouth are all but assured of survival, even if they lose this one.

Prediction: Liverpool -1 Handicap – With Salah back, home advantage and form on their side, Liverpool will put a few past an often leaky Bournemouth defence.

A fantastic run of three wins on the bounce has seen Newcastle rise to tenth place and within touching distance of mathematical safety. Another win will ensure it, but they should be safe either way. With the pressure off, they can give it a real good go against top opposition here.

Arsenal too seem to be playing better after being relieved of the pressure of fighting for a top four finish. Safely through in the Europa League, the Gunners are catching Chelsea in the Premier League and could be set for an unlikely fifth place finish.

Prediction: Both teams to score – Both teams are playing fantastic football and we expect them both to get on the scoresheet at least once in the match.

What a second half performance from Manchester United last week. Coming back from 2-0 down against Manchester City at half-time meant City’s celebrations of winning the league were postponed. United have quietly gone about their business well and have won their last five league matches, including games against Chelsea, Liverpool and Manchester City.

The Baggies finally put an end to their losing streak with a draw against Swansea last week. It will surely count for little, with the phrase too little too late coming to mind. This is a nightmare fixture for the Baggies, whose fans will probably expect little from this match.

Prediction: Manchester United win + BTTS no – United have been impressive lately and will dominate this match against the league’s lowest ranked opponents.

Despite being second best for much of the match, the Hammers maintained their fighting spirit to earn a draw against Chelsea last week. That point is another step to safety, but the importance of this match for both teams cannot be understated. Win and West Ham could be all but safe while putting a massive dent in Stoke’s survival chances. Lose and the relegation battle will be even tighter.

It’s a crunch match for Stoke, who simply cannot lose here. Defeat would really put the odds of staying up against them, but the Potters have lost their last four and are without a win in their last nine league games. Although in these matches, form often counts for little.

Prediction: West Ham Over 1.5 team goals – This will be a fiery relegation battle and we can see the Hammers scoring a few in front of their home fans.

Royal Panda is our bookie of the week. To find out all you need to know about Royal Panda you can read our Royal Panda review. 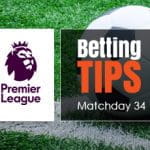