After an international break and a hugely successful start to England’s 2020 EM qualifying campaign, the EPL is finally back this weekend.

There are loads of fixtures to sink our teeth into over the next week. Thanks to some rescheduling to due FA Cup and other fixtures, a number of teams will play twice during this gameweek. Manchester United, Spurs, Chelsea, and Manchester City will all have the chance to pick up two wins in quick succession.

There’s no doubt what our match of the day will be. Both these teams will desperately need to win this one. Liverpool, to keep ahead of Manchester City at the top of the table, while a defeat for Spurs would put another huge dent in their Champions League qualifying chances.

Liverpool are still league leaders, but Manchester City will play their game in hand this week and could move one point ahead of the Reds. Defeat is just not an option with the stakes this high then.

Liverpool may have stuttered in some recent games, drawing a number of them, but they remain almost impossible to beat, especially at home. They are at Anfield here, which places the ball firmly in their court. Sadio Mane is in irresistable form, although strike partner Mo Salah is on his worst run since starting at Liverpool. It’s four games without a goal for Salah, who has spurned a number of great chances in that time. This would be a great game for him to refind his touch.

Bet on the match between Liverpool and Spurs this Sunday

It’s four games without a win for Spurs in the league. They’ve lost three of those four games, and that period has seen third spot, seemingly surely theirs just a few weeks ago, now up for grabs with four times fighting for it. This is a crucial time in Spurs’ season, who could slip out of the Champions League spots completely should they lose here. Harry Kane was great for England throughout the last week, while Deli Alli is finding his way back to his best. Defending against Liverpool’s attacking three is of course key, but to win, Spurs will have to score. That means breaking down the league’s best defence on their home task. It’s a daunting task, and recent form suggests Spurs are not up to the task.

Prediction: Liverpool Win – Liverpool are re-finding their form as we approach the final straight of their season. They are at their strongest at home, where they are on a extended unbeaten streak, and are unlikely to slip up here.

There are loads of games this week, with a number of teams playing their games in hand, to catch up with the rest. We’ll cover just the first round of fixtures, although the action goes right the way through to Wednesday next week.

Things are going from bad to worse for Fulham, but they could now get ugly. Opponents Manchester City are in great form, while Fulham’s defence is about the worst in the league. Avoiding a cricket score is perhaps Scott Parker’s biggest goal here.

City are perhaps the most in-form team in Europe right now. They are still in all four competitions, which is remarkable in itself. Whether those efforts will catch up to them remains to be seen, but you wouldn’t put it past Pep’s men winning a number of them. Despite playing away from home, this is surely a given.

Prediction: Manchester City win + Over 2.5 goals – Fulham have slightly improved under Parker but ultimately have all but given up. City, on the other hand, are playing some of their best football all season.

Brighton are a win ahead of Southampton in the league, but neither team is safe yet. The Seagulls do have back-to-back wins behind them though, and with home advantage, will look to make it three here.

The Saints aren’t playing too badly themselves though. With less points than Brighton, their position is a little more perilous. But, two wins in their last three games is a positive, while a win here would put Southampton level on points with Brighton.

Burnley have lost their last four and that poor run has seen them floating just above the relegation zone, two points clear. They need at least a couple more wins, and they have a fair shot here; Wolves’ away form is hardly the greatest.

Wolves are on a pretty poor run which has seen the race for 7th place tighten up once again. They play twice in the league during the next week, but then also have an FA Cup semi-final to play next weekend. That could see some rotation for this and the next game against Manchester United.

Prediction: Under 2.5 goals – This will be a tight game, as Burnley may see their chance in restricting Wolves and trying to sneak a slim victory.

Palace are yet another team just three points or less clear of the relegation zone. The Eagles have won two of their last four and are playing some good football, with Batshuayi proving a good partner for Zaha. Playing at home against bottom of the table Huddersfield a chance for three points that Palace simply cannot afford to squander.

Huddersfield led twice against West Ham but their shocking defending saw them eventually, somehow, lose that game 4-3. It says a lot about the mental state of a team that is all but mathematicly relegated.

Prediction: Crystal Palace Win – Palace are playing some good football and should be well up for a game that they should on paper comfortably win.

Leicester have improved somewhat since Brendan Rogers took over. The Foxes have won their last two and have closed the gap on Wolves in 7th place, although they do currently lie in 10th. Defensively though, Leicester remain poor, and Rogers really needs to tighten up a defence that are without a clean sheet in ten matches.

Bournemouth missed a number of chances in their last match to draw with Newcastle. The Cherries are surely already safe for this season, so it is job done really. Keeping the motivation up will be difficult, but Bournemouth do have a very kind run in of fixtures, that could see them with a very respectable finish.

Prediction: Both teams to score – These two teams are much more fond of attacking than defending and seem unable to keep a clean sheet between them.

United lost their first league game under Solksjaer against Arsenal two weeks back. It was a costly defeat, but the mood is still generally good at Old Trafford. United play twice this week, but both games are tough. After this they face Wolves, and dropping points in these matches will be very costly as we approach the final stages of the season.

Watford are looking the mostly likely team to challenge Wolves for 7th place. The Hornets are playing well and will give United a good game here. But, Gracia may have one eye on next weekend’s FA Cup semi-final against Wolves, along with another EPL match against Fulham on Tuesday. We will surely see some rotation among the Watford ranks.

Prediction: Manchester United Win – There are still some injuries among the United players, but we still think they will have enough to win here.

West Ham completed a spectacular turn-around to beat Huddersfield last week. But, the Hammers are not playing so well, despite picking up results. Both Felipe Anderson and Marko Arnautovic look a little out of sorts, and will need to pick up their game to compete against an improving Everton.

Everton were fantastic against Chelsea two weeks ago and Marco Silva has managed to steady the ship at Goodison somewhat. However, the Toffees are still only in 11th place, which is simply not good enough for a team of their resources. A win here would see them leapfrog West Ham and climb at least two places.

Prediction: Both teams to score – It’s difficult to know which West Ham will turn up, but they are usually always dangerous in attack. This could be an interesting attacking game, with West Ham having the advantage in recent fixtures between the two.

Cardiff currently occupy the final relegation place and are two points away from safety. They won their last match, but host a top six team here. Chelsea are one of the most out of form teams in the top six though, so Cardiff should see no reason why they can’t get something from this match.

Two wins in their last five is not good enough for Chelsea, who currently look most likely to miss out on a Champions League place. They have two games during this gameweek though, both of them winnable. Six points would be massive, and depending on results elsewhere, could put them back in the driving seat in the race for a UCL spot.

Prediction: Chelsea Win – It won’t be easy, but the Blues should have enough, in a game that they simply cannot afford to lose.

Arsenal are in great form and the win against Manchester United in their last match shows that they can finally beat their top six contenders. A positive mood has returned to the Emirates, where Arsenal have a kind run in of fixtures. Keep up their form, and the Gunners should manage a top four finish.

Newcastle have breathing space between them and the relegation zone, but they will need at least one more win to assure safety. They should be fine then, even though that win is unlikely to come here.

Prediction: Over 2.5 goals – Arsenal have tightened up in recent weeks, but we still expect to see plenty of goals in this one.

Place a bet on this accumulator at Coral 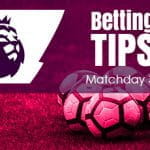