The Premier League fixtures take a back seat this weekend as many of the league’s teams will play FA Cup quarter final fixtures.

That means that our betting tips and previews are a little limited, with just four games taking place. Nevertheless, we’ll bring you all you need to know about all the weekend’s action.

Our match of the day features Liverpool and Watford. The pick of the four fixtures taking place on Saturday, Liverpool must win, after defeat to Manchester United last weekend meant not only that they missed the chance to go second, but fell back a place into fourth behind Tottenham.

Liverpool’s safe passage through to the next stage of the Champions League was somewhat marred by the defeat in the top of the table clash with Manchester United last weekend. The Reds could have moved into second ahead of United with a win. Instead, defeat has meant that they have actually fallen one place to fourth, as Tottenham leapfrogged them into third.

Defeat was costly then, but returning to winning ways will see Liverpool go right back into third, if only temporarily. But it perhaps won’t be as easy as the bookies seem to think. Watford have improved under Gracia and despite being brushed aside by Arsenal last week, the Hornets will return to give it another shot. If Liverpool are to win, they’ll need to play better than they did against Manchester United. Mo Salah, joint top scorer in the league and hero of Anfield, was conspicuous in his absence in that match, as he was unable to have any impact on the game. Most of the Liverpool team were perhaps guilty of that, so Klopp will likely have drilled into his team that he expects much more from them in this game.

Watford couldn’t make it three wins in a row last week after they were swept aside by Arsenal. With the Gunners on such a bad run, perhaps Watford entered into that match with a little naivety.

That would have been the wake up call needed for what is undoubtedly going to be a very tough match. Watford may be buoyed by the fact that Liverpool lost their last match, but that was away from home. At Anfield, Liverpool are a different beast, as they are unbeaten in the league on home turf this year. That shows just how big a task Watford have on their hands then and the Hornets away form perhaps doesn’t inspire much confidence, with Watford having won four times and drawn twice on the road. Watford still have personnel problems at the back, but things have improved at the other end. Troy Deeney has scored three goals in his last five matches and he will be the man Watford will look to for goals here.

Prediction: Liverpool win + O 2.5 goals – The Liverpool win is priced so low that value is non-existent, but we think the Reds will return to form and score at least a couple of goals in this match.

Aside from out match of the day, there are just three other Premier League matches this weekend. Five of the six teams taking part in those matches are locked into the relegation battle, so the games could be more interesting than the fixture list lets on.

Bournemouth took the lead against Spurs last weekend but eventually collapsed to lose the game 4-1. This is a huge game for both teams and Bournemouth will not want to lose. A win here, although not mathematically ensuring safety, could be just enough to keep the Cherries in the league for another season. Three points here, plus another win or a few draws would certainly be enough. Up against the league’s worst team, Bournemouth have all the motivation they need to find a win.

West Brom’s misery shows little sign of ending anytime soon and it surely now is a matter of time before relegation is a mathematical certainty. Like Bournemouth, the Baggies took an early lead in their last match, before eventually losing 4-1. That was West Brom’s sixth straight defeat and with many players appearing to have thrown in the towel, the chances of making it seven here are high.

Prediction: Bournemouth win – West Brom appear to have resigned themselves to their fate while Bournemouth still have everything to play for.

Huddersfield had a great start to their last match against Swansea when the opponents were reduced to ten men. They couldn’t make the numerical advantage count however and eventually drew the game. A point was still valuable and Huddersfield are currently four points clear of the relegation zone. This is another match in which they face opposition beneath them in the league, so neither team can afford to concede points.

Crystal Palace are really paying the price of a tough fixture list with four defeats in a row now. The chance to close the points gap on a team just above them in the table will provide the motivation they need to try get back to winning ways then, as the Eagles haven’t played badly and have been repeatedly unlucky not to pick up points. Both Ruben Loftus-Cheek and Wilfred Zaha could be back available for this match.

Prediction: Both teams to score – Palace have managed to find the net in most of their matches, while Huddersfield too should find a way past a Palace defence that is without a clean sheet in seven matches.

Stoke unsurprisingly fell to defeat against Manchester City on Monday night. That was their second defeat in the last six and they haven’t won any of the other four. Draws won’t be enough and the Potters need to win. They have a chance here against an Everton side that struggles when playing away from home.

An attacking team proved to be the right move by Big Sam last week as Everton beat high-flying Brighton. That match was at home where Everton have earned nine of their ten victories this season. That stat suggests they are unlikely to win here, but Stoke really are struggling currently.

Place a bet on this at Matchbook

Matchbook is our bookie of the week. To find out all you need to know about Matchbook you can read our Matchbook review. 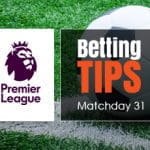