Week 29 is finally upon us, with just ten games left, if feels as thought the season has just flown on by. There are some tasty match ups this week, that’s for sure.

Last week saw Liverpool lose their first game of the season. Nevertheless, the title is still secure. Elsewhere, Leicester continue to struggle, whilst the relegation battle is hotting up.

The match of the week is the Manchester Derby. An unrivaled classic and one that has thrown up some memorable games in the past. Hopefully, this one will do more of the same!

Man Utd are hot on the heels of Chelsea and fourth place now looks like it could come a reality. They are on a five match unbeaten run in the league and it things are starting to look up. It’s a far cry from a few months ago and shows a dogged determination in the squad. A CL finish would be the best thing they could hope for this season.

After their win in the corresponding fixture earlier this season, Utd are looking to do the double over City for the first time since 2009/10. Odion Ighalo could feature more after scoring a double in their midweek fixture in the FA Cup.

Man City are also in top form, having won five in a row in all competitions. They will come into this one without Kevin de Bruyne who suffered an injury in his last match. Sergio Aguero will look to add to his tally of nine Manchester Derby goals this weekend.

City have won three PL matches in a row at Old Trafford, and are heavy favourites in this one. They should have the quality to overcome a weaker United side, but these derbies are always hard to predict. The loss of their talisman de Bruyne could also hit them hard. Expect this to be a tough game.

Prediction: Man Utd double chance and BTTS – This one will be a fiery encounter and we can see the Red Devils pulling off a surprise.

Liverpool finally lost their first game of the season last time out. In the past few games it seemed like an inevitability. They must have been feeling the pressure of the unbeaten season mounting, and now that monkey is off their back, it seems as though Bournemouth will have the bare the brunt of their retaliation.

Bournemouth are now in the relegation zone, albeit on goal difference. They haven’t won in three games and are looking more and more likely to face the drop. Liverpool have won their past 21 home matches and Bournemouth’s away form is terrible. This could be a big win for the Reds.

Prediction: Liverpool to win both halves – The Reds will come out firing and this one could be a big win.

Arsenal are looking for their third PL win in a row. They will be without Lucas Torreira who fractured his ankle in their midweek FA Cup fixture. Kieran Tierney is back in full training, although this game looks to be too soon for his return. The Gunner have won eight of their last nine home games against West Ham, so this should be an easy three points.

West Ham looked like a rejuvenated team against Southampton last week. Jarrod Bowen, Haller, and Antonio all looked a force to be reckoned with up front. Even so, with Moyes in charge, they will probably come to the Emirates with a defensive plan that stunts any form of attacking threat, and they will go behind early and have no plan b.

Prediction: Arsenal to win – The Hammers will have their work cut out to get anything from this one.

Palace come into this one of the back of two much needed wins. They scraped two 1-0’s together and put some breathing space between them and the relegation zone. Things were starting to look a bit tricky, but now barring a terrible run of form they should be safe.

Watford produced a wonderful display to knock Liverpool off their perch with a sensation 3-0 victory last time out. It was exactly what they needed to give their hopes of PL survival a boost. Watford are unbeated in five games against Palace and are desparate for the three points in this London Derby.

Prediction: Watford to win – They will come in to this brimming with confidence and will get another surprise win.

At the beginning of the season this looked like a fixture that would be a relegation six-pointer. Instead, the Blades will be looking to close the gap to the top four with victory in this one. They could move within two points and would keep the dream alive. They will be boosted by the returns of John Fleck and Enda Stevens.

Norwich are four points from safety. Even so, they managed a great victory against Leicester last time out to give them a sliver of hope. With still six points to reach safety, and only 10 games to do it, they will be facing a stiff challenge to survive.

Prediction: Sheffield United to win – The Blades will take advantage of Norwich’s weak away form.

Southampton have lost three of their past five PL games. However, they will see the match against Newcastle as a way to right the ship. They are still without Nathan Redmond and Stuart Armstrong, however Danny Ings should be fit enough to start the match and will be a welcome boost to the team.

If Newcastle lose and other results go against them, they could actually be dragged into a relegation dog-fight by the end of the day. They haven’t tasted victory in the PL since matchweek 23, so they need to buck up their ideas sharpish. Steve Bruce isn’t loved by the fans, so it could turn toxic quickly if results don’t improve.

Prediction: Southampton to win – Newcastle are a bad side, with hardly any goals in them. The Saints should have this one.

Wolves are aiming for their third PL win in a row to keep their hopes of qualifying for the Champions League alive. They are currently five points from fifth, but only two from fourth. Interestingly, they have never beaten Brighton in the top flight, and will look to make amends for that this weekend.

Brighton haven’t won in nine games, furthermore, they haven’t won in six away games. Things don’t look promising. They are now only one point clear of safety, and relegation is looking a real possibility if they don’t improve quickly. The good news is they don’t have any new injury concerns coming into this fixture.

Prediction: Wolves to win – This should be a routine victory for Wolves who are in better form.

Burnley are unbeaten in their last six PL games and are only two points behind Spurs in the table. What’s more their defence has been imperious having only conceded one goal in their last five games. James Tarkowski’s form should be catching the attention of Gareth Southgate, but we doubt he will notice.

Have the wheels fallen off the Mourinho wagon? Spurs have lost four games in a row in all competitions and Eric Dier ended up in the stands confronting a fan in their last match. Even so, Mourinho has never lost to Burnley and will be desparate to get something from this one. He says they will concentrate on the Champions League, but he can’t abandon the league.

Prediction: Burnley to win – Spurs are in chaos at the moment, so until it changes it’s hard to back them.

Chelsea are clinging to fourth place, but need some more wins if they want it to stick. There are whole host of teams waiting the wings. They’ll be without Tammy Abraham and Willian who are both injured. Chelsea’s lack of depth in their squad is beginning to be apparent and they will be tested in this game.

Carlo Ancelotti was sent off at the end of last week’s match, but he was right to feel aggrieved. Everton can climb into the top ten with a win here. Historically, Everton don’t perform well at Stamford Bridge and they haven’t scored in their last three visits to the ground.

Prediction: Draw – This game could go either way, but a draw seems like a outcome we can settle on.

Leicester’s form is slipping. Whether it is from lack of concentration or other issues, it needs to be addressed soon. A seconnd place finish is now a distant memory, and they will instead be looking over their shoulder in order to keep their Champions League spot in third safe.

Villa haven’t won any of their past five games and are coming in on the back of a League Cup final defeat. They are two points from safety and have a real battle on their hands in order to stay up. Jack Grealish has seven goals and six assists in the PL and the Villa talisman is really living up to his name.

Prediction: Leicester to win – The Foxes will secure a win in this one, and ensure they’ll be in the CL next season. 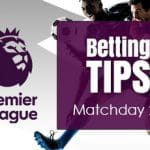