After another storming end to a round of Premier League fixtures on Monday night, we’re back this Saturday with hopefully more of the same.

Chelsea once again fell to defeat, leaving Antonio Conte’s position as manager looking more and more precarious. The Blues face West Brom on Monday night, but the action starts with perhaps the most anticipated match-up between Tottenham and Arsenal on Monday lunchtime.

Fifth place plays fourth at Wembley on Saturday as Arsenal make the short trip to play the Northern London derby against rivals Tottenham at Wembley. Arsenal’s new players had an instant impact as they were emphatic winners at Everton last week, while Tottenham’s draw with Liverpool extended their unbeaten run to eight games.

Spur’s perhaps deserved a point against Liverpool after a strong second half showing, but they needed a nice slice of luck in the form of two contentious penalties to get them over the line. Though the point has meant they remain two points adrift of Liverpool, Chelsea’s defeat to Watford means Spurs are now just one point behind the Blues, who currently occupy the last Champions League place.

Harry Kane scored his 100th goal in that match and the Englishman is in fine scoring form, as usual. Tottenham also now have the luxury of having a pretty much fully fit team, right as we enter a thick set of fixtures, with the Champions League matches approaching. Pochettino will understandably have one eye on that important match, but three points here are a must. Toby Alderweireld is over his hamstring injury, but a lack of match fitness may mean he misses both of these games. Tottenham will be fancying their chances though. Arsenal’s increased firepower means Spurs will have to remain organised in the middle and at the back, but the Gunners defence has been leaky; they’re without a clean sheet in their last eight games.

That suggests that Arsenal may struggle significantly here, but Arsène Wenger has added significant firepower to his team. Pierre-Emerick Aubameyang scored on his debut, while ex-Manchester United man, Henrikh Mkhitaryan, earned three assists in his first 90 minutes for the Gunners. Going forward then, Arsenal are even more of a force, but their problems are, and have always been, at the back. No clean sheets in their last eight doesn’t bode well when facing a team containing Harry Kane, but Arsenal can’t always rely on outscoring the opponents. With Chelsea appearing to collapse, Arsenal may once again believe that the Champions League is not yet beyond them. A win here would be a real statement towards achieving that goal.

Prediction: Tottenham Draw no bet – Anything can happen in the North London derby, but with Tottenham so hard to beat at the moment, we feel they will not lose this game.

Our match of the day is the early kickoff on Saturday. After that, there are five more games on Saturday afternoon, with Manchester City hosting Leicester in the evening match. Sunday features three matches with the action starting at midday, while Chelsea once again play on Monday night as they host West Brom.

Everton put in a spectacularly bad defensive showing last weekend, conceding five goals to Arsenal, and leaving their manager saying that the season needs to end for the Toffees so they can regroup and start again next year. They’re not quite mathematically safe and could actually find themselves in trouble if they continue to lose, but they face a weakened Palace team here who themselves are finding it hard to win again.

Key injuries are starting to become somewhat of a problem for Crystal Palace, as the Eagles find themselves without a win in three. Palace have a nightmare fixture list after this, as they will face all of the top five except from Manchester City throughout February and March, with the next three fixtures being Spurs, Manchester United, and Chelsea. As the relegation battle hots up, three points here could prove invaluable.

Prediction: Both teams to score – Everton have a newfound attacking edge but are still looking woeful at the back.

Stoke have improved under Lambert, but the manager won’t be happy with the way the Potters let a lead slip to lose to Bournemouth last week. Stoke sit in the relegation zone on goal difference, but a win here will put them level on points with Brighton, who are currently in thirteenth place.

The Seagulls did the double over West Ham last week with a good win, that suggests there’s still plenty of fight left in them yet. That win was their first in seven games, but Brighton now have real chance to put together a good little run, as they face teams below them in the table over the next two games.

Prediction: O 1.5 goals – Brighton’s away form isn’t so hot, but we expect there to be a couple of goals in this one.

Swansea’s run continues as they earned an impressive draw away at Leicester last week. The Swans are dragging themselves away from danger and have a great run of fixtures coming up in which they could all but assure themselves of safety if they win the majority. Swansea also put eight goals past Notts County in midweek, meaning they are now unbeaten in eight games in all competitions.

A win still alludes Burnley, but they will be more than happy with last week’s point considering the opponents were Manchester City. Burnley too have a kind run of fixtures coming up and will hope to recreate some of the results that they achieved in the first half of the season. James Tarkowski and Stephen Ward should soon be back from injury, which will re-solidify what was one of the league’s best defences.

Prediction: U 2.5 Goals – While Swansea are on a great run, Burnley are slowly starting to become formidable opponents again and should be able to limit Swansea’s goal-scoring chances.

West Ham’s horrific injury list finally caught up to them last week where they were undone by Brighton. Michail Antonio could return to the starting lineup, which would be a big boost for the Hammers. Things are looking better in defence too, as Winston Reid and Jose Fonte are once again fit.

Javi Gracia seems to have steadied the ship at Watford and his signing of Gerard Deulofeu looks to be an inspired one, as the Spaniard led Watford to thrash Chelsea on Monday night. The Hornets will now look to push themselves back into the top half of the table where they sat for most of the season and will fancy their chances of making it back to back wins here.

Prediction: West Ham clean sheet no – The Hammers are better at home, but their defence is not performing at all of late, something Watford’s attacking talent could really exploit.

Raheem Sterling should have put last week’s match against Burnley to bed, but his shocking open goal miss changed the dynamic of that match and led to Burnley finding an equaliser. This is another tricky match against a team in decent form, but City have dropped points just once at the Etihad this season.

Jamie Vardy made it three goals in three last week as he starts to rediscover his scoring form. Leicester most likely won’t be expecting much from this game, especially with Riyad Mahrez missing, but the Foxes can look forward to a kind fixture run after this match.

Prediction: Manchester City win + U 3.5 goals – City aren’t quite as free-scoring of late and will have one eye on next week’s Champions League fixture.

Huddersfield’s descent down the table continues and in truth, doesn’t really show any signs of slowing. They play an in-form team here, but the good news is that they play just one top ten team in the next eight games. That gives them every chance of picking up results, but they will need to drastically raise the performance levels to turn things around.

Bournemouth continued on a great run, coming from behind to beat Stoke, to see themselves in the top ten for the first time this season. Back to back wins and an unbeaten run of seven games is the best spell the Cherries have had this season and they will fancy themselves to win once again here.

Prediction: Bournemouth Draw no Bet – Huddersfield have scored just one goal in the last five matches, losing all of them, while Bournemouth are on of the most in form teams in the league currently.

Another draw for Newcastle – their fourth in six games – means the Magpies sit just one point clear on the relegation zone. New signing Islam Slimani is out with a thigh injury, though the other new signing, Kenedy, has started well at st Jame’s Park. Breaking down United will be an extremely tough job for Newcastle here.

United returned to winning ways with a straight forward win against Huddersfield. Alexis Sánchez got his first goal for his new club and will likely fancy his chances again here. Jose Mourinho made some big changes to his squad for that match, including leaving out Paul Pogba, and with Champions League matches on the horizon, more key players could be rested.

Prediction: Newcastle U 1.5 team goals – The Manchester United defence is solid against lower league opponents and Newcastle will do well to get a result.

Southampton finally managed a league win last week, their first since way back in November last year and just their fifth of the season. Things finally seem to be clicking for Southampton, who have stuck with their manager all season. The Saints managed a draw with Tottenham a few weeks back and are now unbeaten in four, suggesting this is certainly not a foregone conclusion.

Liverpool will be angry with the way they drew with Tottenham last week, with two late penalties rescuing Spurs. Mohamed Salah continued his incredible goal scoring form with a brace and will be looking to score again, with the Egyptian fancying his chances of taking the golden boot.

Prediction: O 2.5 goals – Southampton are finding form but will still do well to keep out Liverpool. We expect both teams to score in what could be a great contest.

Chelsea’s second defeat in five days sees both Conte’s position as manager and their spot in the Champions League places hanging by a thread. It’s a crisis point for the Blues, who soon face Barcelona in the Champions League, and could get themselves in a real tangle if they don’t get a confidence boosting win here.

West Brom have certainly improved under Alan Pardew but they were the lesser team against Southampton last week, falling to defeat despite their best efforts. Bottom of the table and four points adrift from 19th place Huddersfield, the Baggies need to start picking up points fast.

Prediction: U 3.5 Goals – West Brom may go for it here with Chelsea looking vulnerable, but the Blues must steady the ship and grind out a result.

Place a bet on these selections at Betfred 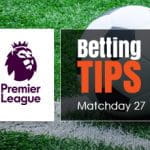