There’s something slightly different about the Premier League this week. For the first time this season, we enter a new gameweek where Manchester City, seemingly unbeatable up to this point, lost their previous game. It’s now Liverpool that have the current longest unbeaten streak in the league.

Given City’s lead at the top of the table, it’s still unlikely they’ll be caught. While the chase for the remaining Champions League places is still entertaining, it’s the bottom half of the table where things are shaping up to get particularly interesting. Most teams at the wrong end of the table picked up points last week, with West Brom getting their first win for 18 games. That means that things are as tight as ever, with around ten teams far from assured of staying up.

A mid-table clash is not usually one to write headlines about, but this one could be fiery. West Ham were denied three points against Bournemouth four weeks ago on Boxing day after a goal that was both offside and handball was wrongly allowed. With just one point separating two teams that are far from safe this season, there’s everything to play for at the London Stadium.

West Ham’s win against Huddersfield was emphatic and the performance of one player, Marko Arnautovic, characterised the team’s performance. The win was the Hammer’s fourth in eight games, in which time they’ve only lost once. They’ve also already played and drawn with Bournemouth in that time, though the Cherrie’s equaliser should have been disallowed. That makes this one somewhat of a grudge match then, especially with the teams separated by just one point in the table and a win could see the Hammers move into the top ten for the first time this season.

Plenty has been said about West Ham’s transformation under Moyes, but the team made difficult work of beating Shrewsbury Town in the FA Cup in midweek. It took the Hammers 120 minutes in the second leg to finally see off Shrewsbury and while it was far from a full strength team, key players such as Lanzini, Ogbonna and Obiang all featured heavily. Fatigue may play a part for West Ham then and with barely any points separating all the teams in the bottom half of the table, that replay could prove very costly.

Like West Ham, Bournemouth are on a four game unbeaten run. As with most teams in the bottom half of the table, they’re far from safe, so every game, especially against those teams around them in the table, should be treated as a cup final. A win here would see Bournemouth leapfrog the Hammers. Though the Cherries also had a midweek cup game, one day later than West Ham. They also lost that game to Championship side Wigan.

Bournemouth scored three times against West Ham on Boxing Day just a few weeks back and they should look to target a Hammer’s defence that is still without key personnel and a clean sheet in five games. Though the Cherries too have a poor defensive record this season. You’d have to look back to the end of November for Bournemouth’s last clean sheet, one of just four this season, meaning they are without a clean sheet in ten matches. Handling the dangerous duo of Marko Arnautovic and Manuel Lanzini could prove very difficult then for an under-performing defence.

Prediction: Both teams to score – Despite being a mid-table clash, this is a very important fixture. Both teams will want to win after drawing a few weeks back, but both defences currently seem incapable of keeping a clean sheet.

Once again, there’s action from Saturday through to Monday night. Liverpool face bottom of the table Swansea, while Manchester United are the only top six side to face a team in the top half of the table.

Two points from their last twelve has seen Brighton slip down the table to just one win above the relegation zone. Their home form is a little better, with one win and two draws in their last three home games. This will be a tough test though, but the Seagulls may fancy their chances of a draw against a misfiring Chelsea.

Consecutive draws have seen Chelsea drop from second to fourth place, as things tighten up among the teams battling for the Champions League places. Chelsea are expected to win here and must do so, but with Hazard and Morata both way out of form, their strikeforce is currently looking impotent.

Prediction: Chelsea win – Chelsea might be out of sorts up front but they have only lost once in the last 15 league games. They have to sort out the attack soon and should do so here.

With the Alexis Sánchez saga raging on, the Chilean was left out of the squad last week, where Arsenal surrendered a one goal lead to eventually lose to Bournemouth 2-1. The pressure is well and truly back on Wenger and Arsenal, who look increasingly likely to miss out on a Champions League place once again.

Palace remain one of the form teams in the league after a win against Burnley last week. The Eagles lost to Arsenal a few weeks ago at home, so will be looking for revenge here. Arsenal’s defence is still plagued with injuries and Palace will believe they have every chance to exploit that.

After a fantastic first half to the season, reality is setting in a little bit for Burnley, who haven’t won now in six games. Their three defeats in the last five games is just one more than they had in total up to that point in the season. With Chris Wood out through injury, goals have been the problem, which doesn’t bode well for their chances when facing the league’s best defence.

For the first time in a long time, United closed the gap on their neighbours in the last gameweek. The gap is still large and realistically United will have to settle for second at best. A trip to Turf Moor is almost always difficult, but Burnley are currently a little out of sorts and United are hitting some decent form.

Prediction: U 2.5 goals – Burnley are tough to turn over at home and while they will likely not pick up points here, it should be a tight game.

Six games without a win and three defeats in a row mean the spark a new manager brought to Everton has well and truly gone out. Everton looked lifeless against Tottenham next week in a performance Big Sam called unprofessional. His players will be expected to grab the bull by the horns and sweep aside the second lowest placed team in the league.

West Brom finally brought the league’s worst run of form to an end with a win last week against Brighton. Whether that will be the impetus to turn their season around, or is a rare win in a terrible season, remains to be seen, but today’s opponents haven’t won themselves in six games.

Prediction: U 2.5 goals – A tight game in which neither team will want to lose given their recent form.

Leicester’s draw against Chelsea really should have been a win last week, as the Foxes missed a number of chances to win the game. Riyad Mahrez put in another fantastic performance and will likely be licking his lips at facing one of the league’s worst defences.

Watford snatched a draw against struggling Southampton last week, meaning they just hang on to tenth place. The Hornets lost the reverse fixture on Boxing Day 2-1 so will be looking for some revenge, but Leicester are favourites here.

Prediction: BTTS yes – Both teams who play attacking football and rarely don’t find the back of the net.

Paul Lambert watched from the stands during his first game as Stoke City boss. It didn’t go too well, with the Potters losing 3-0 to Manchester United. A win was perhaps never expected from that game though and this will be the first winnable game of his tenure. Lambert plucked Stephen Ireland out of obscurity to feature in the match and may well tinker with the lineup once again.

Huddersfield were comprehensively beaten by West Ham last week which was somewhat of a surprise given their form at home this season. They’ve struggled away from home and may be weary of a team given new life under a new manager. Without a win in five games, Huddersfield can’t afford to lose to a team below them in the table.

Prediction: U 2.5 goals – The teams drew 1-1 in the reverse fixture and we expect similar here with neither team wanting to lose.

City’s unbeaten run finally came to an end against Liverpool last week in a fantastic game of football. It was close in the end, but Liverpool were the best team on the day. The question is, will they now implode or was that a one off? You’d expect the latter and City should bounce straight back. This fixture is as good as any to do so.

Newcastle couldn’t hold on to a win against fellow strugglers Swansea last week. Victory would have seen them nine points clear of bottom of the table Swansea, but instead they still sit just one win above the relegation zone. The Magpies are unbeaten in three, but even the most confident of Newcastle fans won’t really expect to pick up points here.

Prediction: Manchester City win + BTTS no – Despite improvements, Newcastle aren’t exactly prolific up front. City will get straight back to winning ways and should do so in style.

Southampton just couldn’t hang onto a win last weekend, meaning they sit in a very precarious position. Pellegrino’s position as manager is equally precarious and Spurs would likely not be his first choice of opposition. The Saints haven’t won since November, almost two months ago and victory here would be a shock.

Spurs have built up some momentum as they look to break into the Champions League places. Harry Kane can’t stop scoring and scored a hattrick – his second in a row – against the Saints less than a month ago. It’s unlikely he’ll do that again, but you’d still put your money on the striker to score once against a Southampton defence low on confidence.

Swansea earned a draw last week but had the chances to win. They won’t get many more chances, especially ones as good as that match, to pick up three points, so mistakes can no longer be made. Beating the league’s most inform team would be a massive shock and though Liverpool’s away form is understandably not as good as at home, they are unlikely to slip up.

Liverpool are now the team to beat after doing away with the previously unbeaten Manchester City last week. It was a perfect example of Klopp’s gegenpressing in action, which led to mistakes from City’s defenders and goals for Liverpool. More of the same will see Liverpool emerge easy winners and extend their unbeaten run to fifteen games.

Prediction: Liverpool Half Time/Full Time – The Reds are on a high and their explosive, attacking approach should easily see off bottom placed Swansea.

Place a bet on these selections at William Hill 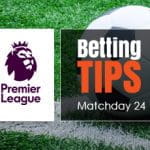