It’s been a fantastic first week of fixtures, we’ve seen some surprises such as Chelsea suffering a shock defeat and who can forget the amazing 7 goal thriller at the Emirates? What a start to the season, it’s great to have football back!

It was a close decision on which game would be our match of the day. The Manchester City v Everton encounter should be a great match but there can only be one choice so we’ve gone for Sunday’s Tottenham Hotspur v Chelsea. Last season’s runners up play host to the champions at Wembley stadium. Should be a cracker!

If Chelsea had any trouble sleeping thinking about the difficulty in them retaining their title, then the shock 3-2 home defeat by Burnley will be giving them nightmares! Gary Cahill was sent off in the 14th minute, two Vokes goals and one from Ward was enough to give Burnley an unlikely win. This was Chelsea’s first opening day defeat since 1998 and manager Conte is likely to hit the transfer market for more reinforcements.

Tottenham are the only team in the whole league who have yet to buy anyone but this is a team that have won 12 of the last 13 games they have played so you can understand the confidence that Mauricio Pochettino has in his team. Kyle Walker has been sold to Manchester City and has been replaced in the team by academy youngster Kyle Walker-Peters. Walker-Peters who was a world cup winner with the England under 20’s this year, put in a man of the match performance and looks an exciting prospect. One of the most bizarre stats in football is the fact that prolific goal scorer Harry Kane (on 99 goals for Tottenham) has never scored in August! Is he cursed?

Prediction: 2:1 – Wembley woes for Chelsea and two defeats in a row!

Although we have no Friday night football this week, we do have action on Monday night and it’s an exciting clash between Manchester City and Everton. Liverpool and Crystal palace also catches the eye.

Swansea didn’t manage a single shot on goal during the 0-0 draw with Southampton. Manager Paul Clement praised his players and said he was pleased with the quality of the defending but was critical of his team’s inability to make use of the ball in the final third.

Romelu Lukaku made a dream start to his Manchester United career by scoring two in his league debut. The £75 million man scored in the 33rd and 52nd minute, Martial and Pogba both added goals in a routine 4-0 win against West Ham. Nemanja Matic was simply stunning and showed why United were keen to sign the midfielder from Mourinho’s former club Chelsea.

Prediction: 1:3 – United will be too powerful for the Swans.

Despite having the vast majority of possession, Bournemouth were beaten 1-0 by West Bromwich. It was mainly down to poor finishing that the score line wasn’t much heavier. Manager Eddie Howe will be concerned that his team only managed one shot on target the whole game.

Watford’s dramatic 93rd-minute equaliser against Liverpool sent Vicarage Road into wild celebrations and the game will last a long time in the memory of the lucky Watford fans who were there. Watford keeper Heurelho Gome was in inspired form and despite conceding a penalty. Great saves from an Alberto Moreno shot and from a Dejan Lovren effort kept his side in the game.

Prediction: 0:2 – Watford will be full of confidence after scoring three against Liverpool.

Burnley produced a shock result when they beat holders Chelsea at Stamford Bridge. Sean Dyche has instilled a great mentality at Burnley and they look a well-disciplined side. Burnley scored three with three shots and although they were hanging on at the end, the result will be a huge boost to everyone at the club.

Ahmed Hegazi scored the only goal of the game on his debut for West Brom. Any Tony Pulis team is hard to beat and new signing Jay Rodriguez shows a lot of potential going forward and was unlucky not to have scored at least a couple of goals.

Prediction: 2:1 – Home advantage will be enough for Sean Dyche’s team.

Leicester played their part in an epic battle with Arsenal in the curtain raiser fixture of this seasons Premier League. Leicester were only seven minutes away from snatching a 3-2 win at the Emirates but Aaron Ramsey and Giroud scored late goals to steal the victory. Scoring three goals at the Emirates is still an achievement and the form of Vardy will be vital for the Foxes.

A different season, same old Liverpool! In last week’s preview, I did predict that the Liverpool game would be a draw (although I did say 1-1) and the 3-3 result at Watford didn’t disappoint. It took a somewhat controversial 93rd-minute goal to deny Liverpool the win but the game should have been put to bed a long time before full-time. Liverpool wasted a string of chances, as good as Liverpool are going forward, their defence could star in a “carry-on” film.

Crystal Palace made a mockery of my prediction last week and managed to get slaughtered 3-0 by Huddersfield Town. The Premier League newcomers tore apart a Palace side that looked as if they were taking part in a pre-season friendly. Manager Frank De Boer likes playing three centre-backs but they were totally bypassed by Huddersfield’s use of quick balls into the area.

Prediction: 3:2 – Leaky defences, awesome strikers. Could be a great game this one.

Mauricio Pellegrino is the new manager at Southampton and will be disappointed that his first competitive match in charge of the Saints ended in a 0-0 draw. He will though be pleased of the defensive quality of his team. Poor finishing cost dear with misses by Manolo Gabbiadini, Dusan Tadic and Maya Yoshid.

West Ham were totally outplayed by Manchester United and the heavy 4-0 defeat at Old Trafford sees them sitting at the bottom of the table (yes, I know it’s week 1!). The Hammers offered little going forward and even the signing of Javier Hernandez who was a fan favourite at Old Trafford wasn’t enough to spark life into West Ham. Pablo Zabaleta deserves some praise, his sliding tackle stopped a goal bound shot and prevented Lukaku from claiming his hat trick.

Stoke will feel hard done by with the narrow 1-0 defeat to Everton. It took a Jordan Pickford late save to deny Xherdan Shaqiri an equaliser and Mark Hughes after the game stated that Stoke had managed Everton and there was very little between the teams.

Arsenal managed to snatch victory from the jaws of defeat in the 4-3 win over Leicester. It was a fantastic match and swung like a pendulum as one team and then the other gained the advantage in what surely will be classed as one of the games of the season.

Prediction: 1:2 – A tough physical battle. A close game and a late goal.

Huddersfield had a dream start to their new life in the Premier League. I very much doubt the bookies had to pay out too much on the amazing 3-0 score line but Huddersfield ripped apart a sorry Crystal Palace team. Sam Vokes will now be in many people’s fantasy football teams and he could well add to his two goals he scored against Palace with one or two at home to Newcastle.

Newcastle owner Mike Ashley has hit the headlines saying he cannot compete moneywise with clubs like Chelsea and Manchester City. Mike Ashley has a reputed personal net worth of around £2.4billion so his words haven’t gone done well with many supporters. He has also stated that he’d be happy to finish 17th, I doubt manager Rafael Benítez will accept this expectation and would want to achieve success, something unlikely at Newcastle. In the weekend game, they lost 2-0 to Tottenham, mainly due to a stupid stamp by Jonjo Shelvey. His indiscipline cost his team dear.

Prediction: 2:0 – Huddersfield to continue to live the dream, for now!

City overcame a resilient Brighton team 2-0 and considering they would have watched on as some of their rivals slipped up, they will see this as a vital win. Although they never looked in serious danger of defeat, as the minutes ticked by you could sense the away support getting anxious. As is often the case (he has hit six goals in his seven opening day Premier League games), Sergio Aguero was the difference and he put in a man of the match performance to secure the three points.

Everton have Wayne Rooney back at the club and the England Captain wasted no time in showing he can still provide the goods at the top level. The 31-year-old left Everton to join Manchester United 13 years ago, the lifetime Everton supporter marked the occasion with a well taken header in the end of the first half. Everton have spent nearly £100m on new players and the £30 million spent on the goalkeeper could well turn out to be a bargain as he made some great saves.

Prediction: 3:1 – A statement of intent from the blue side of Manchester

Time to ramp up the bets in the second week, a tasty 6-fold. A £10 6-fold bet on these selections would pay £710.20 plus any additional bonuses. 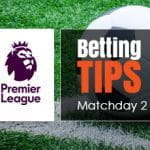