It’s week seventeen of the EPL, the Champions League culminated in some top games during the week, but now it is time to turn our attention back to the Premier League.

The PL is hotting up, and now the games are coming thick and fast. There are some great match-ups this week, none more so than Arsenal vs City. Check out the other games listed below.

The best game of the week is the match up between Arsenal and City. The Gunners are still finding their feet under Ljungberg, whilst the Citizens will be hoping to bounce back from their defeat last weekend.

Arsenal finally won on Monday night against West Ham, 3-1. It was a much needed monkey off their back and they halted a winless run of nine games. Now they face a tough test at home to City, who will come out all guns blazing.

A small bright spot for Arsenal fans this season has been Gabriel Martinelli, the youngster has been bagging goals left, right, and centre and score on his first start on Monday. Another player looking to kick on, is Pepe, who is starting to come into his role with the club. He has a big price tag to live up to, but he has shown flashes that he can fulfill this duty.

City have won their last two matches away to Arsenal, and come into this game looking to avoid successive losses. They are now surely out of the title race, and can ill-afford any more slip ups. Even if they win the rest of the games they would still have no guarantees of the title.

It looks as though City will be once again without Sergio Aguero, but Jesus is coming into this game on the back of a hat trick. City really need him to step up to the plate in the coming months, and show that he is truly an elite striker. They will also be hoping Sterling can get back to scoring ways in this one.

Prediction: City to win – They will have too much quality for Arsenal to deal with, although it could be a close one.

Liverpool are storming on, their home record is 8-0-0 and it looks as though this winning run will continue this weekend. History is on the Reds side, as they have beaten Watford 6-1, 5-0, and 5-0 in their past three home games against them. A similar scoreline would not surprise anyone.

Watford come into this game bottom of the league and managerless. It will be a tough task, and have lost their past five away games against Liverpool by a combined score of 20-1. Their sole win of the season has come away from home, but we don’t expect another in this one.

Prediction: Liverpool to win (-1.5) – This will be a routine victory for the league leaders.

Burnley are on a losing streak of three games. They aren’t playing particularly well as of late, and really need a win in this one. They will be hoping that Ashley Barnes and Ashley Westwood will be available in this one, although Charlie Taylor is a doubt so he may not be available.

Newcastle continue to defy expectations, and have won two on the trot, and sit four points ahead of Burnley. They have 3 wins and five defeats on the road this season, and we could see their first away draw in this one.

Prediction: Draw – Both sides will not want to give anything away and we can foresee a stalemate.

Chelsea qualified to the knockout stages of the Champions League with a good win midweek. Now they turn back to Premier League duties, where they hope Tammy Abraham can shoot his way to victory in this one. He has 11 goals so far on the season and has been a revelation for the Blues.

Bournenouth are in dreadful form and they really need to pull something out of the bag here, but we just can’t see it. They have lost five games in a row and are slowly heading towards the relegation zone. They are only one point outside and could find themselves even closer by the end of Saturday.

Prediction: Chelsea to win – The home field advantage will give the Blues the edge in this one.

Leicester are truly a team on a roll. They have won an incredible eight PL games in a row. Few would have expected that the Foxes would be the only title challengers to Liverpool, but here we are. At the moment they are the only team capable of sustaining the form to challenger for top spot.

On the other hand, Norwich are still rooted in the relegation zone. They are four point adrift of safety and things aren’t looking good. They will be hoping Todd Cantwell and Teemu Pukki can provide the goods this weekend, but it is a tough task for the Canaries.

Prediction: Leicester to win (-1.5) – The Foxes will extend their winning run to nine, and in style.

Many would have predicted this would have been a relegation scrap before the season started, but the Blades have other ideas. Sitting eighth in the table, they are looking very pretty. They will still want to win this one, and they should be able to pull through.

Aston Villa come into this one on the back of two straight losses, and haven’t won in three. Their away record of 1-1-6 does not inspire any confidence. They are only above the relegation zone on goal difference, and will be desperate for points in this one. It is a tough one to call, and could go either way.

Prediction: Sheffield United to win – It could end in a draw, but we will go for the Blades in this one.

Southampton haven’t won any of their last three games against West Ham, but will be hoping Danny Ings can shoot them to victory by adding to his 9 goals. They recently had a decent run, and need to be winning games like this for a chance to stay up.

A year ago West Ham were five points better off, and now Pellegrini has said he doesn’t fear relegation even though they should. No team is too big to go down, and unless they improve they will be heading into the relegation zone in no time at all.

Prediction: Draw – West Ham will be hoping to win, but a draw is a more realistic outcome here.

United are seeking to win their third PL game in a row, after back-to-back wins against Spurs and United and it has really changed the mood around Old Trafford. This is another game they should win and Ole’s boys, spearheaded by Marcus Rashford will come out all guns blazing here.

Big Dunc will be in the dugout again for Everton after guiding the Toffees to a victory against Chelsea. It was their first win in four, and was really a mood changer at Goodison Park. Gylfi Sigurdsson is looking forward to the game having scored in four of his last five matchs at Old Trafford.

Prediction: Man United to win – Everton aren’t that good, and United should win these types of games at home.

Wolves have only lost once at home all season, and are currently on an 11-match unbeaten run. They have collected more point to teams in the top six to those out of them and that could be their undoing in this one. It will be an intriguing game no matter what happens.

Jose has three wins in four, and another one here would send Spurs above Wolves in the table. Harry Kane will be looking to score his 10th goal of the season, for the sixth year in a row. An incredible feat for the world-class striker.

Prediction: Draw – Wolves love a draw at home and we see it happening in this one.

Crystal Palace are unbeaten in three and will see this as an opportunity to grab three points. They are sitting pretty three points ahead of Brighton and this will be the perfect opportunity for them to head even further up the table.

Brighton have turned things around the last couple of games, but they are still only four points clear of safety. Even so there are much worse teams that will be going down, so they don’t have much to worry about in that regard.

Prediction: Crystal Palace to win – It will be a win for the Eagles in this one. 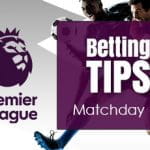