It’s week ten of the EPL, and the league is really beginning to shape up. It’s crazy how quickly time flies, yet we area already over a quarter of the way through the season.

Liverpool surprisingly struggled last week, and will be looking to get back on track at home this weekend. There are many other tasty matches lined up, see which games stand out below.

The best game of the week once again features Liverpool. This time they are at home against Tottenham Hotspur. Although on the surface this may seem like a difficult game for the Reds, Spurs have struggled, so we expect a victory for them.

Liverpool’s last outing was a very disappointing draw away to Manchester United. Mo Salah was surprisingly absent, and after he played midweek, they’ll be hoping he features in this game. This ended their run of 17 consecutive wins. They’ll be hoping to start a new run in this match.

This is the first game between the sides since last year’s Champions League final. Since their victory, Liverpool have gone from strength to strength, whereas Spurs have headed in the opposite direction. Things are looking good for the Reds, as they have only lost once in the past 13 matches against Tottenham, winning eight in that span.

Things look set to get worse for Spurs this weekend, as in the last 23 games against teams at the top of the table, they haven’t won. Despite their midweek Champions League victory against Red Star, they haven’t offered anything in the league. We fully expect them to be outperformed in this one.

Prediction: Liverpool to win – We expect the Reds to get back to winning ways with an easy victory here.

Southampton have had a pretty dire season at home so far, with one draw and three losses. This goes all the way back to last season, and have only five wins in 23 home games. They really need to sort this out if they expect to stay in the Premier League. They come into this game with no new injury concerns.

Leicester have lost back-to-back away games, but these have been against Man Utd and Liverpool, so we can forgive them there. Even so, Leicester have never won a PL game that takes place on a Friday. It’s something they will want to rectify today, and we expect them to do so with an easy victory.

Prediction: Leicester to Win – The Saints are awful at home, and the Foxes look like to good of a team for them to handle.

Man City lost their last home game to Wolves, and it was a truly embarrassing performance. City lost Rodri midweek, and will be hoping Otamendi can step into the defence. Guardiola has never lost consecutive home games in his career as manager, and we think City will bounce back in style in this one.

Villa come into this game on a roll having won back-to-back games. However, this match will be too tough for them to extend this run. In the last nine PL games at City, they have lost them all. It would be an upset of huge proportions if Villa manage to pull this one out of the bag and we just can’t see it.

Prediction: Man City to Win (-1.5 handicap) – City will bounce back in style to close the gap on the leaders.

Brighton have never lost to Everton in the Premier League, and in the last home game produced a wonderful performance to beat Spurs 3-0. Only one point separates these sides, and it will give the Seagulls hope they can spring above their opponents with victory come the end of the day.

Everton are everyone’s favourite team to play at home this season. The Toffees’ record is terrible, with one draw and three losses away from home. They will be boosted by the return of Fabian Delph, Morgan Schneiderlin, and Seamus Coleman who all return from either injury or suspension respectively.

Prediction: Brighton to Win – This one could end in a draw, but Everton’s awful away form tips it in the Seagulls favour.

Watford remain winless and rooted to the bottom of the table. With a goal differential of -16, and only five goals scored in nine games they are truly and abysmal team. Nevertheless, they did get an encouraging draw away at Spurs last time out, and are desperate for their first win of the season. Without Troy Deeney, and Danny Welbeck this will be difficult.

Bournemouth haven’t lost away to Watford in the last eight games with six draws and two wins over that span. The come into this game without a goal in the last two games, however, and need to start scoring again. This seems like a good game for them to get their shooting boots on and get a win.

Prediction: Draw – Bournemouth should win, but with their form we can’t trust them.

West Ham have lost two in a row and need to turn round things quickly. They have dropped to 11th in the league after an encouraging start to the season. They are still without Michail Antonio, Fabianksi, and Reid. They’ll be looking to Sebastian Haller to fire them to victory, he is their top scorer with four goals on the season so far.

Sheffield United are the poster boys for keeping the team together that got you promoted. They didn’t overspend and bring in loads of foreign imports, instead they stuck with the core of their team and they have been rewarded with a fine season so far. They come into this game with no new injury concerns and remain undefeated on the road this season.

Prediction: West Ham to Win – The Hammers turn it round with and hand the Blades their first away defeat of the season.

Burnley come into this game sitting eight in the league having played some decent football this season. Chris Wood is a doubt, as he has a hamstring problem, bit they will be hoping Ashley Barnes is fit enough to take over the attack. In their past five home games against Chelsea, they have lost four, and will be hoping to rectify that.

Chelsea are on fire at the moment and have won six consecutive games in all competitions. They also love playing away from home, wining their last three PL away games by more than three points. What’s more with Callum Hudson-Odoi back to full fitness they really are starting to see the strength in-depth this young squad possesses.

Prediction: Chelsea to Win – Their away form has been impeccable. Coupled with their prowess at Turf Moor, they should win this one.

Newcastle are in the relegation zone and are struggling. They will be without Andy Carroll and Fabian Shar, along with Matt Ritchie, Florian Lejeune, and Isaac Hayden. Historically, they have performed well against Wolves, but it looks as though it could be a miserable Sunday afternoon on Tyneside.

Wolves started the season slowly, but are now on an unbeaten run of seven games in all competitions and seem to be back to their old selves. This will be their 100th away game in the Premier League, a magnificent occasion for the team and they will be hoping to top it off with all three points.

Prediction: Wolves to Win – Newcastle are a pretty rubbish team, and Wolves’ attack will feast upon them.

Arsenal have a good home record this season, with three wins and one draw, and in the month of October, they haven’t lost in the PL since way back in October 2002. Arsenal are still a side that lack identity, however, and it is unsure which direction Unai Emery wants to take the squad. They come into this one with confidence though, having scored in every home game they’ve played against Palace.

Palace have improved their scoring record a little bit, but they are still averaging less than one per game. They have decent form away from home, but tend to struggle against clubs with a big name. It will be no different this weekend as they struggle and lose.

Prediction: Arsenal to Win – It depends which Gunners team turns up, but they should win this one.

The goals have dried up for Pukki who has failed to score in his past four PL matches. They are winless over that span too. They find themselves second bottom and are in danger of slipping far behind. An interesting side note to this games is that out of the 16 played in the PL only one has ended in a draw.

After a decent performance against Liverpool, this would be a classic game for United to lose. They laboured to a midweek win at Partizan in the Europa League, and are just overall a bad team. Matic, Pogba, and Luke Shaw are all doubtful, but David De Gea should return after having the night off on Thursday.

Prediction: Norwich to Win – They need to get back to winning ways, and there’s no better team to face than United. 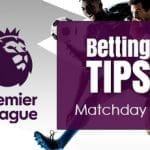