We are down to the final week of the Euros and just four teams remain in the competition. There are two great semi-finals to look forward to. Join us as we preview both of the games.

England will never have a better opportunity to reach a major final. Supported by a cast of 60,000 fans, Wembley will be bouncing. Denmark are not to be taken lightly though, they are an experienced side who have won this competition before.

The Three Lions are closing in on their dream of claiming a first-ever European trophy. There is huge faith in the team to win their second major trophy, winning the 1966 World Cup on home soil. The semi-finals and the finals will be played at Wembley stadium; Fans will be hoping that this is a lucky omen!

Defensively, Gareth Southgate’s side has been excellent, keeping eleven consecutive shutouts and are yet to concede in the tournament. England is the highest-ranked team left in the tournament ranked fourth, but if they do get past the Danes, they will face either Italy or Spain, either of which will be a tough encounter.

A convincing 4 – 0 quarterfinal win against Ukraine was their best performance in the tournament. Harry Kane has returned to form and has now scored three goals in the last two games, a run that has come just at the right stage after a slow start to the tournament. Luke Shaw has been brilliant steaming down the left-wing and has now provided three assists in two games. Raheem Sterling has been an important player scoring both of England’s goals in the group stage and has been involved in twenty goals in twenty-one games.

Gareth Southgate has already written his name in the English history books after leading the Three Lions to two consecutive major semi-finals. The last England manager to do so previously was Alf Ramsey. However, Southgate faces another tough game against an underdog, just as he did in the semi-finals in the World Cup. On that occasion, it was Croatia that went through. However, England certainly has the players to get past Denmark; they need a performance to match their undoubted talents.

Denmark has been playing with their lives and, against all odds, managed to qualify for the tournament’s semi-finals. They will be hoping to repeat their 1992 heroics where they went all the way to win the tournament despite being a surprise late inclusion to the competition. Their tournament for the Danes turned around in the last group game where they scored four goals past Russia and repeated the same scoreline against Wales in the Round of 16.

Their defence has been their strength, led by Simon Kjaer, who has been a solid commander of the backline. In addition, Pierre-Emile Hojberg has been impressive both in providing cover and on the attack providing three assists. Partnered by Thomas Delaney, who scored the opener in their 2 – 1win against the Czech Republic, the two could be the determinants of the tie against Declan Rice and Kalvin Philips. Kasper Dolberg is another dangerous player. The 23-year-old, who plays his club football with Nice, has netted three goals and looks like a threat every time he touches the ball.

The Danes will be the underdogs coming into this game and can use it to their advantage playing with eight defensive players and with pace to burn up front. They will be reviewing Croatia’s performance that disappointed the Three Lions in the World Cup semi-final and booked a place in the final. They are a real threat on the counter with great defensive cover in defence, giving them the freedom to express themselves upfront.

In the other semi-final, there is a great looking clash between Italy and Spain.

Italy has won just twice in the last fourteen meetings in all competitions against Spain (seven draws, five defeats). However, they did triumph in the Round of Sixteen stage of Euro 2016, the last time the two sides played. This win had a degree of revenge about it as Spain beat Italy at this stage of the competition in the 2012 edition.

Leonardo Spinazzola injury is the biggest upset for Roberto Mancini. The Roma defender, who can also play left midfield, has been delivering key performances throughout the tournament and assisted in Italy’s vital 2-1 win over Austria. They are going strong currently on a thirty-two game unbeaten run, but statistics will likely count for little against a foe they know well in a semi-final tie. Nicolo Barella scored the impressive opener will most definitely start alongside Jorginho and Marco Ferrari, who will have a busy day at the office against a possessive minded Spanish side.

Lorenzo Insigne scored a wonderful strike for the second goal in the 2-1 win against Belgium and is their biggest threat in front of goal, taking the battalion from Ciro Immobile, who was wasteful in the game. In terms of performance, Italy has been the most consistent side throughout the tournament and are the bookies favourite in this one. The Azzurri’s have reached the semi-final of a major tournament for the twelfth time, with only Germany (20) appearing in more. Moreover, they have progressed from nine of the previous eleven, including each of the last four.

In the first knock-out round, they faced tough opposition, England’s conquerors at the last World Cup, Croatia. But again, they scored five, with all the goals spread between the players. A worrying aspect for Spain in the 5-3 was they let Croatia back into the game, letting a three-goal slip right at the death. They also needed extra time in the quarterfinals, winning via penalties after a 1-1 draw with Switzerland. It wasn’t for lack of trying; they just lacked a lethal finish after attempting twenty-eight shots against the Swiss.

Despite their imperfections in front of goal, they are the highest-scoring team with thirteen goals in the last three games. Alvaro Morata (two goals) joined Fernando Torres as Spain’s top scorer in the European Championship but was substituted in the fifty-fourth minute. Gerard Moreno netted thirty goals last season but is yet to score in the competition after 227 minutes. The semi-final is the first game for Luis Enrique side against one of the strong favourites, which will be a stern taste for them. 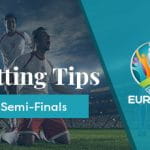