We can honestly say that we wasn’t expecting our last Euro 2020 match preview and betting tips to contain England! Yet the Three Lions are just one game away from being crowned kings of Europe. There is just the little matter of the Italians to deal with!

Wembley will be the place to be on Sunday night as 60,000 fans, the majority of them England supporters, watch the final of Euro 2020. Millions more will be watching in pubs and homes. It will be an unforgettable night.

Italy has been one of the standout teams in the Euro 2020 tournament so far. They set the bar high for the competition, raising the curtain in style in the first game, a match against Turkey that they won 3-0. Their performance in the first game announced themselves to the world as a resurging giant after going through a tough spell, with the lowest point missing out on the 2018 World Cup.

Italy is well known for its legendary defence but has now upped its game and has a lethal attack. They have averaged 18 shots per game, second only to Spain (19.2) in the competition. However, unlike England who relies on a finisher, Italy’s goals are spread throughout the team. Five of the team have two goals.

If the Italians are firing on all cylinders on Sunday, the main goal threats are likely to come from Federico Chiesa and Ciro Immobile.

Chiesa scored a vital goal in the 2-1 win against Austria and, equally as important, the goal in the 1-1 draw with Spain in the semi-finals. Immobile was incredible in the win against Turkey; the 31-year-old scored and assisted and took the man-of-the-match award. He also provided the assist for Chiesa for the goal against Spain. Underestimate him at your peril; for Lazio, he scored twenty goals and provided six assists last season.

The Italian basics are still intact, with the very experienced duo of Giorgio Chiellini and Leonardo Bonucci leading the backline. On the right of defence, Giovanni Di Lorenzo is having a good tournament and is good in the air, which is likely to be important against players such as Harry Kane. The 27-year-old wins 2.2 aerial battles per game.

The loss of Roma’s Leonardo Spinazzola will be a loss, though. The left-sided defender may not be the best tackler in the game, but his ability to spot a key pass will be a blow for the Italians.

Mancini’s side will hope their experience motivates them to get the job done as the margins are narrow in this one.

England’s success in this campaign has been built from the back. In the ‘Euro Final Stage Best XI’, which is based on stats, three England defenders make the team of the tournament. Harry McGuire, John Stones and Luke Shaw.

Harry McGuire has been a rock at central defence. The 28-year-old has played 390 minutes in the competition, staying on the pitch every minute since making his tournament debut against the Czech Republic. The Manchester United man was a contender for man-of-the-match against Germany, and his goal in England’s 4-0 win against Ukraine means he has scored as many goals as England have conceded all tournament.

27-year-old John Stones has played all bar eleven minutes at the Euros was exceptional in the game against Germany. His passing percentage in the tournament so far is 94.6%, higher than the 93.3% he achieved in the twenty-two games he played in Manchester City’s successful Premier League campaign.

The third of the trio, Luke Shaw, has been excellent. One of the lighter undertones of this Euros has been the continuation of the feud between Jose Mourinho and Shaw. The pair publicly fell out while Mourinho was Shaw’s manager at Manchester United. Mourinho has used his punditry position to criticise Shaw, which is becoming more difficult due to Shaw’s excellent performance.

One popular meme doing the rounds has Mourinho saying: “So you got two assists against Ukraine, I say why stop there? Why not three, four?”.

Shaw’s performance against Ukraine was incredible, especially as he only played for 65 minutes, but his performance all tournament has been great. He provided an assist in the Germany win and was a contender for man-of-the-match against the Czech Republic. His performances have been so good, the legendary Roberto Carlos got in touch with the left-back and called him “Shaw-berto”, high praise indeed!

While the improvements in England’s defence are remarkable, it’s goals that win games and, therefore, for Three Lions fans; it’s great to see Harry Kane getting back to his best form. After a slow start to the campaign, four goals in three games has announced the England captain, and you wouldn’t bet against him adding to his tally in the final. His partner in crime, Raheem Sterling, has also been excellent; his goals in 1-0 wins against Croatia and the Czech Republic were vital to qualification from the group.

It’s a fitting final that we feel will be decided on the tightest of margins.

Place a bet on Italy v England at bet365 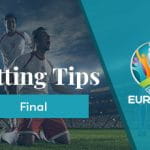