We’ve nearly done it boys and girls! We’ve nearly survived the barren spell of top flight football. The new season is so close you can almost taste it! To really get you in the mood, we take a look at the Premier League games on match day 1 and share our predictions, views and suggest our bookmaker of the week. 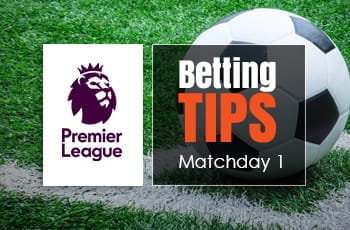 I’m happy to see Newcastle United back in the top flight. The Premier League is not the same without the “Toon Army”! Last year Newcastle gained promotion by finishing as champions of the Championship. Dwight Gayle scored 23 goals last season, and it will be interesting to see how he copes with the Premier League. Tottenham finished in 2nd place with a points tally that would have normally secured the Premier League crown. Lack of signings is worrying some Spurs fans but it is still a team full of quality. Will Harry Kane continue his goal scoring exploits? Is there any doubt?

Prediction: 1:2 – I expect a battling performance from Newcastle but Tottenham will nick it. 3

Arsenal feel the pain of being outside the top four for the first time in a generation after finishing fifth last season and will have a point to prove this year. Latest rumours from the Emirates is that top scorer Alexis Sanchez who scored 24 last time will stay. If he strikes up a good partnership with £52.7m new boy Alexandre Lacazette then they could be challengers.

Leicester looked in trouble for a big part of last season but they have just signed forward Kelechi Iheanacho from Manchester City in a £25m deal. City obviously rate the player and have inserted a £50 million buy back fee. His goals will certainly be needed and worth a small punt as an anytime scorer if he plays.

Prediction: 3-1 – A great start to the season, Friday night action. Arsenal will be too strong for the Foxes.

Liverpool will be praying for the transfer window to shut, with Barca rumoured to be circling over Philippe Coutinho. Coutinho has scored 34 goals and made 31 assists in his Liverpool career. Manager Jurgen Klopp believes Liverpool are capable of winning the Premier League title this season and they will want a good start.

Watford’s end of season results were awful! Defeats by Man City, Chelsea, Everton, Liverpool and relegated Hull ended a season to forget. They will be hoping new signing, Brazilian under 20 star Richarlison from Fluminense, will provide the goals to ensure another year in the top flight.

Prediction: 1-1 – I think we may see a surprise at Vicarage Road. Expect almost total Liverpool domination but Watford to sneak an equaliser.

Everton’s season has already begun with a narrow victory over two legs in their Europa play-offs against Ruzomberok. This early season action might benefit Everton players with their match fitness. They have spent big this year and expectations are high.

Stoke, as everyone knows, can be a nightmare to play against. They’re very physical and the stats show they were the second-best team for aerial duels in the league. Tough to break down, no-one likes playing Stoke!

Prediction: 2-1 – The wave of optimism will carry Everton over the line but it won’t be easy.

Although Palace have some wonderfully creative players (such as Zaha) they are woefully lacking in some of the basics of football such as possession and passing. Great going forward but always a liability at the back. A nervous season ahead.

Huddersfield it’s fair to say surprised many people with their promotion via the play-offs last season. The 4-3 penalty win against Reading meant that Huddersfield get to sit with the big boys this year. It’s easy to predict a tough season but they may surprise some people.

Prediction: 2-1 – A tough game with the experience of Palace shining through.

Southampton were the league’s worst team for putting chances away. For every goal scoring chance they had, it would hit the back of the net just over 7% of the time. That is incredibly wasteful and needs to improve.

Swansea last season suffered due to too many individual errors. Manager Paul Clement has brought in Roque Mesa to try and steady the ship and may well prove to be a wise investment. Fernando Llorente and Gylfi Sigurdsson are key players, and with the transfer window still open, will they still be there when it shuts?

Prediction: 2:1 – A entertaining game is a likely prospect at St Mary’s. I fancy home advantage will be key.

West Brom manager Tony Pulis is infamous for the hard to beat teams he puts out. Defensively they are strong. Allowing other teams to have possession, they are a well drilled and organised team.

Bournemouth are a team that never know they are beaten and last season just over a quarter of their points total came from games in which they were losing. Armed with this knowledge, I’m going to place a bet in-play on Bournemouth to win if West Brom score the first goal on Saturday.

Prediction: 1:3 – Jermain Defoe to score a brace and a man of the match award.

Chelsea as you would expect are huge favourites and I really don’t see Burnley getting anything here except a sound beating. Chelsea will have new boy Morata and a partnership with Batshuayi could be quite special.

If Burnley are to escape relegation this year, then they will have to perform better on their travels. A visit to the champions is not the start they would have hoped for. Home form was great with wins against Everton and Liverpool but Sean Dyche’s team will need to find a cure for their travel sickness.

Prediction: 3-0 – The pace and the accuracy of shots will be too much for Burnley.

The fact that Brighton are even playing this game is almost a miracle, 20 years ago. They were on the cusp of non-league football and now they face a team who paid more for their full-backs this transfer window than Brighton paid for their stadium. Mathew Ryan, Markus Suttner and Pascal Gross have been added but they will be against it this season.

City are the bookies favourite and it’s not difficult to see why, £200 million spent and Pep hasn’t ruled out more additions yet. I see an easy away win here.

Last season’s draw specialists Manchester United take on West Ham in the late Sunday kick-off. United will be desperate in improve on 6th place. The bookmakers have United as second favourite, along with Chelsea to win the league. They will need to start the season well and learn to kill off teams.

West Ham had a disappointing season and only managed to finish 11th but it would have been worse had they not had 3 wins and 3 draws in their last seven games. They have signed some great players in Pablo Zabaleta, Joe Hart and Marko Arnautovic. It is however the signing of former Manchester United player Javier Hernandez that could well be the signing of the season. “Little pea” is a great player and well worth a score at any time punt.

As it is the first week, I’ve played it fairly safe to try and start the season off with a win. The Crystal Palace selection is perhaps the riskiest of the bets on paper at least, the rest looking solid. 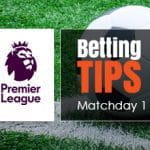