Football is back! Finally, after months of nothing we have football to look forward to on the weekend. Whilst the PL is still on lock down, the Bundesliga is here for you.

We’ll be taking a look at all the weekend’s tasty fixtures, from Dortmund vs Schalke to Union vs Bayern! Football is back, the Bundesliga is our saviour. Take a look at our top Bundesliga betting tips below.

The match of the week is definitely Dortmund against Schalke. Kicking off at 14:30 UK time, there will be lots for punters to look forward to. The days of a packed weekend of football are back!

This derby match is something Every Bundesliga betting fan would love to watch. Usually, a crowd of 80,000 would pile in to create an electric atmostphere, on Saturday, it will be just the players themselves.

Dortmund are hot on the heels of Bayern and want to get the season restarted with a bang. They’ll be looking at their talisman Erling Haaland to provide the goods. Jadon Sancho, whose future lie elsewhere, is also a threat.

Even with Dortmund’s attacking power, the ‘Revierderby’ brings about a rivalry that can stunt normal rules. Schalke are led by David Wagner, a name that many will remember from Huddersfield. Why they ever got rid of him is a question they will rue. He has trasnformed Schalke into top-four contenders after a dreadful year, the previous season.

Jonjoe Kenny has never lost a Derby (granted he’s only played one!), but the young England right-back is one to watch out for. it’s great to see young English players prosper.

Prediction: Dortmund to win – This is not an easy one, and these Derby games can always go either way.

Rest of the Bundesliga Games

Coming up are our previews and Bundesliga betting tips for all the rest of the weekend’s action.

Already we are faced with a game that no-one in England will really know about, Fortuna Dusseldorf find themselves in the playoff relegation spot, four points from safety. This is a must-win game for Uwe Rosler’s boys. Another name English fans will remember well.

Paderborn are rooted to the foot of the table and seem certainties for the drop. they have lost four in a row, and are now just waiting until the season confirms their destiny. They were dealt a blow when Streli Mamba was ruled out for the rest of the season with an injury.

Prediction: Fortuna Dusseldorf to win – Rosler’s men will get a much needed home victory and the three points.

RB Leipzig are a great team, they are in the UEFA Champions League quarter-finals – it will be devastating if they don’t get to complete the tournament! Look for Timo Werner to carry on his deadly form. He has score 16 goals so far in the league.

Freiburg aren’t really anywhere in the table. They are in the pack that is firmly in the middle and have not got much to play for. We wouldn’t be surprised if they rolled over in this one, as we are sure their minds will be elsewhere.

Prediction: RB Leipzig to win – The are on a great run of form, and they have the players to easily win this one

Hoffenheim haven’t won in six games, so this is a perfect way to get back on track. They are looking to get back into the Europa League spot. They will rely on Christoph Baumgartner for the goals, so keep on eye on him on Saturday.

Hertha have been is disarray this season, both on and off the pitch. They are only six points above the relegation places and have had some rubbish performances. Even so, they haven’t lost in five away games, so they do have some fight in them.

Prediction: Draw – We have a feeling this one will end in a stalemate as both sides find their feet after the break.

Augsburg are slowly slipping down the table and are now just 5 points clear of the relegation places. They haven’t won in five matched, and now they have replaced their former coach with Heiko Herrlich. They will be looking to Florian Niederlechner to end his 6 game goal scoring drought.

Wolfsburg are unbeaten in six league games are will be looking to move up to sixth. They are being scoring freely with 10 goals over their past five matches. They will miss the presence of Wout Weghorst, who has managed to back 11 goals this season, but he is suspended for one match.

Prediction: Wolfsburg to win – They pile on the misery for Augsburg, who are slipping closer to the drop-zone

Frankfurt have lost three league games on the bounce. They seem to be more of a cup team, having once more reached the DFB Cup semi-final. They will be looking for Filip Kostic to break his goaless streak, as they still need to pick up points to be sure of safety.

In contrast, Monchengladbach find themselves only six points off top and are challenging to finish in the top-four. They have stout defence, and a spearheaded by Marcus Thuram. Yes, that is Lilian’s son! How time flies.

Prediction: M’gladbach to win – They are the surprise package of the Bundesliga, and will win again on Saturday!

One of two games on Sunday, Cologne are coming into this one it top form. They have now safely moved up out of the relegation battle and are looking at a mid-table finish. They have Jhon Cordoba to thank for 10 goals this season, who just so happens to be a former player of Mainz!

Mainz are four points above the relegation places and were dealt a huge blow in their last game. First-choice goalkeeper, Robin Zentner was ruled out for the rest of the season. They are desperate for points, so this could work in their favour. Cologne may not play as well without their loyal fans.

Prediction: Mainz to win – A surprise win for the relegation-threatened team. They are in desperate need of the points.

Union play in one of the only stadiums that resembles the traditional English grounds, and are a great ‘alternative’ club for fans to support. They were fully expected to struggle and were touted as relegation candidates. Instead, they find themselves in mid-table, with the scalps of Dortmund and M’gladbach in their pockets.

29-time champions come into this one flying and top of the league. For Bundesliga betting fans, then this seems to be rather a boring predictable outcome. The gulf in quality will be on show on Sunday. Robert Lewandowski hat-trick anyone?

Prediction: Bayern to win (-1) – This is a good game to use a handicap. Without any fans, this will be a rout.

Werder Bremen are two points off the bottom and eight points from safety. They are struggling big-time. Everton fans will remember Davy Klaassen, but he is suspended for this one. Furthermore, 41-year old Claudio Pizzaro is also out – although he is still to find the net this season. Bremen needs points, fast.

Leverkusen, on the other hand, have been storming up the table. They are just two points off fourth and want to secure Champions League football for next season. Kai Havertz is their star-man and will be looking to him for inspiration.

Prediction: Leverkusen to win – It seems a foregone conclusion that this will be the outcome.

Place a  bet on this 5-fold accumulator at Betway 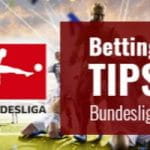